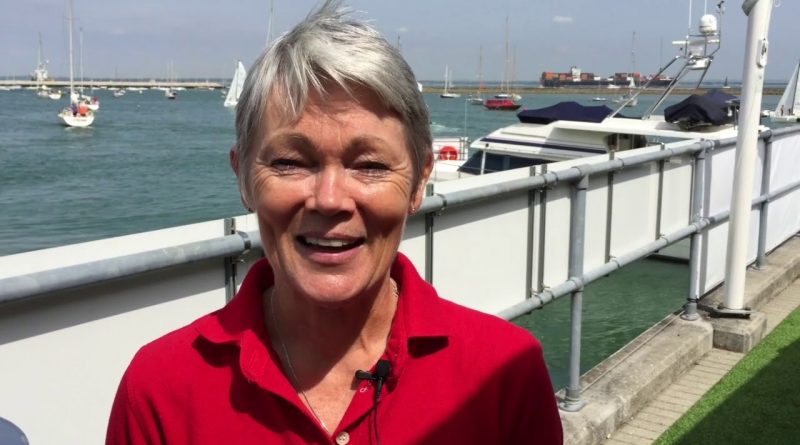 Director Alex Holmes, tells the inspirational tale of adventure on the dangerous high seas and deliberate prejudice on dry land of Tracy Edwards, the star of his new documentary Maiden.

It’s the true story of her journey as skipper of the first all-female crew to enter the ‘Whitbread Round the World’ in 1989. Her teenage dream was met with male opposition; the men thought she would never finish the race, and even made bets on her failure. Potential sponsors rejected her, fearing her crew would die at sea and generate bad publicity. In spite of these obstacles, she persevered to overcome male sexism by shocking the sporting world and proving that women are very much the equals of men in yacht racing.

Edwards and I chatted on June 21, 2019, as she was in Chicago promoting Maiden.

Tracy Edwards: I’m not entirely sure, but I do know it’s been to quite a few film festivals, and I think we’ve just been flagged in the top five favorites for Oscar nominations, so that’s very exciting.

SKA: Your background as a teen is so incredible. Can you tell me how you ended up on a ship, and you can tell me the age, I believe it was very young, working on a ship?

TA: My teenage years were not great, so, my mother really encouraged me to travel. She knew I could do better somewhere else and I think I wasn’t doing very well and I needed to find whatever it was I was looking for, and I couldn’t be happy just staying where I was. Traveling to Greece and backpacking and working bars was brilliant. It really seems like for all the traveling, apart from a few initial bouts of homesickness, which I did get, I realized that this traveling was definitely for me, to discover new things and new horizons.

Then, when I discovered sailing, I was just like, ‘Oh my God, this world, this life, exists?’ I mean I stumbled into it; I just got so lucky. So, really getting onto my first boat was, for me, it was in about three days I realized this is what I’m going to do for the rest of my life. I was seventeen.

SKA: Why do you think that you were so driven to assemble a female crew to sail around the world?

TA: Well, it really started out as quite a selfish thing, because I wanted to navigate the Around the World Boat Race and I knew there wasn’t a crew, male or female, that would have me as a navigator racing around the world. That’s the world I inhabited. My mom always used to say to me: ‘This is the world: if you don’t like it, change it. Don’t moan about things. Don’t gripe. Get on with it.’ I thought, ‘Well, okay. I need to change my world.’ And ‘change my world’ means be the navigator in my own project.

I knew it had to be a female crew because I also really wanted to prove that woman could sail around the world, and we could do this. And I was so completely convinced after meeting so many great women sailors that we could do this.

And then it just developed on from there into a much more general and broad need to do something for women, for women’s empowerment. To be a part of the fight that I initially did not know was happening. I suddenly thought, ‘Wow: we’re in a battle that we didn’t know we were having.’ It developed as we went along and it was exciting to battle, to win the race, and to overcome this male prejudice that they had against women sailing.

SKA: I was wondering if you have any relatives that perhaps display these qualities? I know for me, my grandmother was very driven in her career, and she had an apartment near the college where she taught, and she commuted on the weekends in the ’40s, which was very unusual, and she had five children.

TA: Yeah. In my family, all the women in my family are scary. My mom was incredible, very inspirational. When my dad died, she somehow got my brother and me through private school. When she died, I found lessons, which proved how hard she fought during that time in her life. She was an extraordinary woman. And her mother, my grandmother, as well, was just amazing. She was a nurse and was born in Edinburgh. She built a family, pretty much from nothing. You know, they had nothing. I remember her being this feisty woman. My mother was as well. I come from a long line of feisty women.

SKA: Thank you for that answer. Do you feel there are any differences in the way men sail as opposed to women?

TA: That’s such an interesting question. I think, at the top of my sport, the governing bodies make no change; there’s no change. Well, not enough, anyway. There’s still a hardened resolve that this is a men’s sport, and you know, I think the sexism probably is not as outrageous, but it’s insidious. It’s kind of an underlying current.

I think in the real world, in real life, women still find it hard to get onto these big professional racing yachts. What I do find really incompatible, and I can’t quite work it out, is that I know these guys individually. And they’re all great. And they would be horrified if someone treated them the way that girls are treated on boats. But, you put them together in a crew, and they become something else. They become this sexist, unthinking, can-be-quite-cruel group of people. And I don’t understand it. It’s this sort of male mob mentality, whereas if you separate them all out, they’re lovely guys.

SKA: Yeah. I was shocked by the yachting press that actually took bets on your failure. And that hurt you financially. How did you handle that?

TA: It didn’t hurt financially as we’d just got off the ship then. If they’d done it beforehand, yeah, it might worsen. But you know, Ken saying; actually, I wouldn’t listen to any of that stuff. He looked at it and went, ‘Well, that’s rubbish. That is all they’re talking about, and I know you can do it.’ I want to say thank you to the guys in the documentary for being so honest about how they were, because Alex did tell me, ‘Please don’t be tempted to brush it under the carpet and sort of say, ‘Oh, yeah, no: we thought they’d do it…’ Do you know what I mean?

SKA: Right, right. That was great that they were open about it, and yes. That’s fantastic. Did their behavior drive you to succeed even more?

TA: Yes, definitely, my resolve was much stronger due to the negativity.

SKA: It’s such an uplifting film, there’s so much in the film that’s just amazing. I loved it when all of those ships were there when you came back. How did that feel?

TA: Oh my god, it was just stunning. So unexpected. Howard knew this was going to happen and he didn’t tell us because he wanted it to be a wonderful surprise, which of course it was.
All of us were just completely blown away, and it did soften the blow for not winning. It made it much easier for us to accept the fact that we have come second and we have to live with that.

SKA: Have any of the males that w opposed you or said negative things, have they come around or have they apologized?

TA: Oh, absolutely. Most of the big boat skippers were very supportive and thought we could do it.

SKA: I was surprised that people feel that women can’t work together, but I appreciated the concept that men really didn’t want women to band together in any way, which you brought out in the film. I was a teacher for 20 years in a female-dominated school, and I can tell you firsthand that collaborating together, solving problems, and even planning for children is more productive than planning by yourself. So, I don’t understand how they could say that about females on a ship. You have to work together, and you have to get along.

SKA: Yes, I agree. There’s also the notion in the film that men don’t like us to gather together in any way, as they feel threatened. I appreciate the fact that you are out there fighting the fight for women, and I will look forward to seeing possibly one of your speaking engagements. So, good luck with the film.