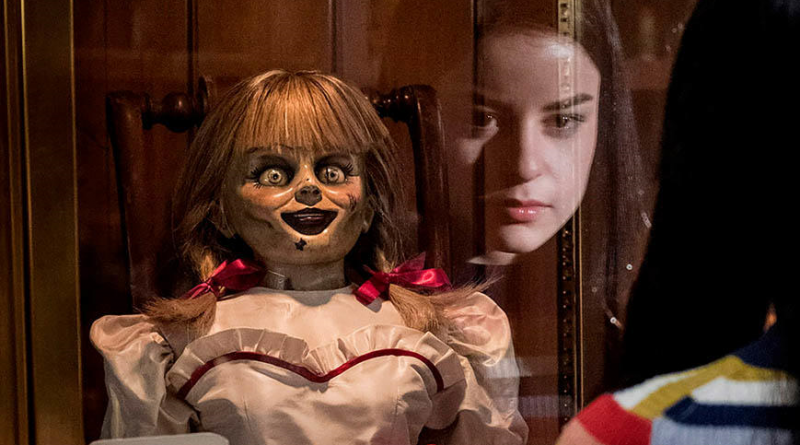 Set in 1968, this installment finds supernaturalists Ed (Patrick Wilson) and Lorraine (Vera Farmiga) taking custody of creepy Annabelle from two frightened nurses who claim that a demon has taken up residence inside the malevolent doll in an attempt to possess a human soul.

As they cautiously transport Annabelle home, their car breaks down near Maryville Cemetery, where Annabelle, perched in the back seat, apparently rouses the dead from their graves. Clairvoyant Lorraine believes she’s a conduit or beacon for other spirits, as Ed is almost run down by a semi-trailer.

When the Warrens arrive at their split-level house, Annabelle is ensconced in their Artifacts Room, along with evil objects like the Toy Monkey, Spirit Bell, Black Shuck, and haunted Samurai armor.

Glass surrounding Annabelle’s case is from Manhattan’s Trinity Church and a priest sprinkles holy water while reciting a protective blessing. That apparently immobilizes Annabelle until there’s an unexpected visitor.

Preparing a 10th birthday celebration for the Warrens’ daughter Judy (Mackenna Grace), curious Daniela (Katie Sarife), a friend of their teenage babysitter Mary Ellen (Madison Iseman), steals the key and sneaks into the Artifacts Room, hoping to achieve a spiritual re-connection with her recently deceased dad.

Ignoring the “Warning: Positively Do Not Open” sign, she approaches Annabelle’s case, releasing the doll’s demonic power to animate the knife-wielding bride and a grim reaper known as The Ferryman whose funeral coins get scattered about, among other ghoulish things.

Annabelle screenwriter Gary Dauberman makes his directing debut, creating a predictably tense atmosphere with creaking doors and jump scares, as Judy and the two teenagers endure a night of terror.

On the Granger Movie Gauge of 1 to 10, Annabelle Comes Home scares up a spooky 6. While there’s no post-credits scene, the Conjuring spin-offs will inevitably continue.