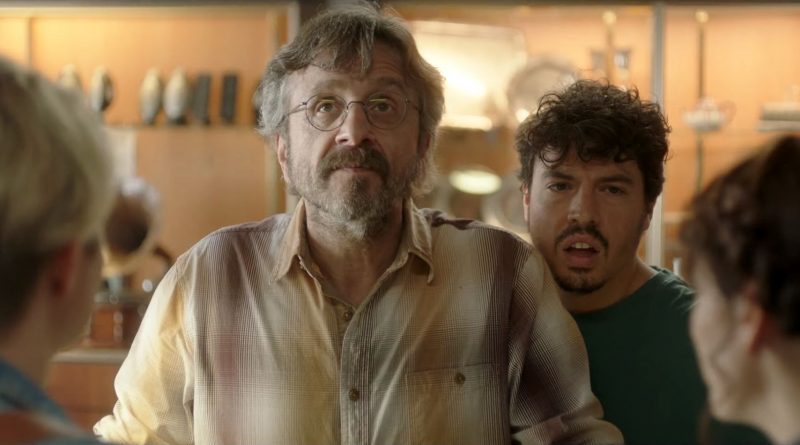 In a regressive era deeply mired in conspiracy theories, revisionist history, fake news and questionable truths, esteemed filmmaker Lynn Shelton’s hilarious and beautifully crafted Sword of Trust is a welcome pleasure. This provocative ensemble comedy is anchored by an excellent cast, inspired writing, quirky yet accessible characters in complex interpersonal relationships, and a zany premise that mocks our current political and cultural divide. Indeed, one character, who believes the Earth is flat, argues, “Are we just to believe everything that’s been fed to us from the time we were a little kid until now? You have to question these things and that’s the problem. No one is questioning. No one’s going out and saying maybe this isn’t true because they’re too scared or they don’t want to know the actual truth.”

When Cynthia (Jillian Bell) and Mary (Michaela Watkins) arrive to claim Cynthia’s inheritance from her deceased and seriously demented grandfather, they’re dismayed to learn he only left her an antique sword. It’s been in the family for generations and has a questionable backstory, but diehard conspiracy theorists insist it proves the South won the Civil War. It isn’t until they try to unload the relic on the Delta Pawn Shop’s bad tempered owner Mel (Marc Maron) and his tinfoil hat, slacker employee Nathaniel (Jon Bass) that they discover there’s a serious black market for this heavily coveted ‘prover’ item. Together, in a reckless misadventure that unfolds like a greed-fueled antique road show for good ol’ boys, they try to sell it to the highest bidder. What makes this film so entertaining is, just when you think you know where the story is going, an unexpected plot twist spins it in a completely different direction.

Shelton’s eighth feature was shot on location in Alabama, and she makes the location and the music, which Maron wrote and performed, an integral part of the narrative. Not only does she co-write (with Mike O’Brien), direct, and produce, but she also delivers a delightful cameo as Deirdre, Mel’s loopy ex whom he’s reluctant to admit he still loves. Shelton elicits great performances from her cast, which are believable, full of emotional depth, and grounded in humanity. Particular noteworthy is the raw, emotional performance by Maron that takes place during a pivotal moment in the back of a van. “Sword of Trust” is a ‘must see’ that takes Shelton’s impressive work to a whole new level.