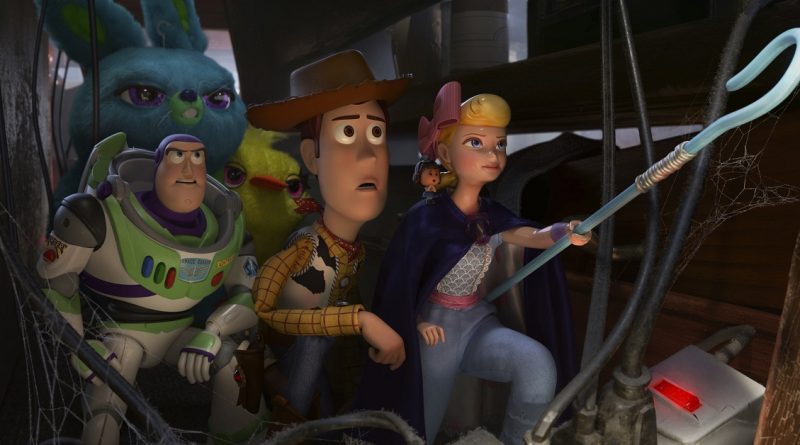 The brilliant minds at Disney/Pixar have pulled off the seemingly impossible with the “Toy Story” series, creating a franchise that, four films and 24 years in, hasn’t produced a single dud.

Despite my enduring adoration for Pixar, I was one of the film fans who reacted reluctantly to news the animation studio was making “Toy Story 4.” After all, 2010’s “Toy Story 3” gave the groundbreaking franchise such a perfect, full-circle ending, what more could be added that could be on par with those three sublime films?

But “Toy Story” is now a quartet of great movies, with a fantastic new installment to make audiences laugh, gasp and, yes, cry – again.

The screenplay by Pixar staple Andrew Stanton (who has worked on all the “Toy Story” movies) and newcomer Stephany Folsom proves that whether a story has a happy ending depends on where you decide to stop telling it.

The story, which is credited to eight people, including actors Rashida Jones and Will McCormack, takes one of the biggest questions from the initial trilogy – whatever happened to Bo Peep (voice of Annie Potts)? – and spins it into another daring, funny and thought-provoking animated adventure, complete with another bittersweet, tear-inducing ending.

As usual, the story is driven by the exceedingly human struggles of an old cowboy doll named Woody (two-time Oscar winner Tom Hanks), who at the end of “Toy Story 3” gave up his chance to go off to college with his longtime owner Andy (John Morris) to ensure his plaything pals had a better future than a box in the attic.

While getting passed on to imaginative preschooler Bonnie (Madeleine McGraw) has been a great next phase for Buzz Lightyear (Tim Allen), Jessie (Joan Cusack), Rex (Wallace Shawn) and the rest of Andy’s old toy gang, Woody has been increasingly relegated to the back of the closet, quite a comedown after nearly two decades as Andy’s favorite toy.

When shy, scared Bonnie nervously goes off to kindergarten, Woody seizes a chance to be useful again, sneaking into her backpack to offer moral support. So, he’s there to witness something incredible: Bonnie takes a spork, pipe cleaner and broken popsicle stick and creates Forky (Tony Hale), bringing the craft project to life as a toy because that’s how she sees him.

Although he immediately becomes Bonnie’s favorite and a kind of security blanket, Forky is terrified to be alive and convinced he belongs in the trash, so he constantly tries to throw himself way. Woody takes on the job of keeping Forky out of the garbage and at Bonnie’s disposal, which becomes an even tougher task when her parents (Lori Alan and Jay Hernandez) take her on a road trip in their RV.

Given Forky’s determination to escape Bonnie’s grasp, it’s not surprising that Woody gets lost again, crossing paths not only with his old flame Bo but also with her tiny, plucky bestie Giggle McDimples (Ally Maki), a plush pair of wisecracking carnival prizes named Bunny and Ducky (Jordan Peele and Keegan-Michael Key, respectively), the proudly Canadian stunt car driver Duke Caboom (Keanu Reeves) and Gabby Gabby (Christina Hendricks), a long-shelved antique store doll desperate to find a child to love her – and willing to dispatch her creepy gang of ventriloquist dummies to make it happen by whatever means necessary. (Tulsa native Bill Hader adds to his growing list of voiceover credits with a small but effective role as a disaffected carnival worker.)

Directed by Josh Cooley, “Toy Story 4” transforms the dusty corners of an antique shop, the inner workings of a pinball machine and the nooks and crannies of a traveling carnival into visually intriguing landscapes for epic adventure, while the heartbreaks, sacrifices and life-altering decisions of plastic playthings become as compelling as any human drama – because they have been made just as relatable.

Whether “Toy Story 4” truly is the fitting end of the franchise or just another installment of the series, I’m ready for playtime as long as Pixar keeps making these movies this great.