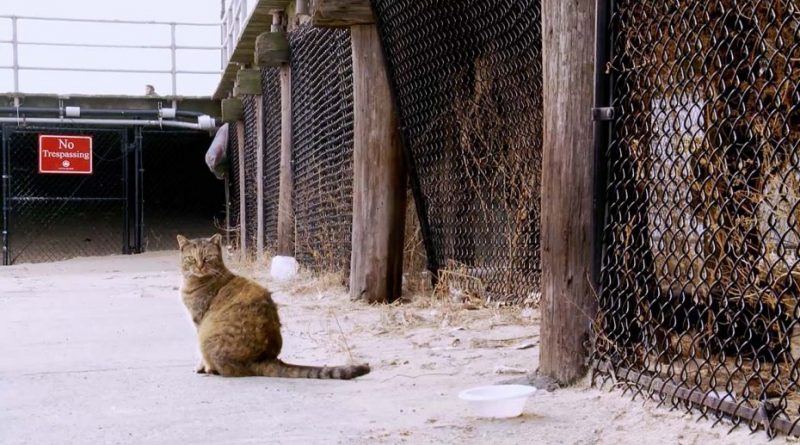 So many stray cats, so few homes… which is not to say that New York City’s five boroughs aren’t full of happily domiciled cat lovers with homebound kitties. Only that its streets are teaming with abandoned pets and their feral progeny, more cats than even the most ardent lovers of our slinky little familiars can take in. And while cats generally fare better on the streets than dogs—they’re efficient little predators of the first order; just ask bird lovers—their lives are nonetheless are harsh and shorter than they should be.

Directors Rob Fruchtman and Steve Lawrence focus on a dedicated group of four Brooklyn-based cat rescuers—volunteers willing to sacrifice their time, make space in their homes and spend their own money—to participate in Brooklyn Animal Action’s TNR program.

The trap-neuter-return strategy is controversial among some cat lovers, in that its primary focus isn’t homing/rehoming street cats. It’s intensely practical and rooted in the understanding that cats aren’t dogs: They wear their domestication lightly and while a feral-born kitten can be nurtured into a house pet, a feral adult is another matter; BAA’s operating principle is that the practical approach is to make sure that they don’t keep producing litter after litter of homeless babies, doomed to perpetuate the born-breed-die cycle.

Fruchtman and Lawrence focus on local women like Aleah, Claire and Sassee, Mariana and Tara (at least one of whom has the rueful sense of humor to keep a Crazy Cat Lady figurine in her room full of humane traps and kitty-filled cages), all of whom invest their time and their own money—$300+ on cat food alone, one says—to stop the cycle of exponential population increase one spayed/neutered cat at a time. “Don’t talk about it,” one says. “Be about it.”

To the credit of the filmmakers and the rescuers, little time is wasted denigrating established institutions like ACC (Animal Care and Control), an NYC-run shelter that has been viciously criticized for euthanizing older cats (and dogs) because they’re unadoptable. As someone who went to adopt an adult cat from ACC and discovered that a 7-month old—still possessed of a kitten’s oversized paws, enormous ears and babyish temperament—was too old for people who wanted a kitten was an eye opener. And the film’s sequence in which a man surrenders his 11-year-old cat for adoption is admirably fair… he has his reasons and kudos to him that he agreed to be filmed, though an elderly cat’s chances of being adopted are slim to none.

Animal rescue work is a personal avocation—The Cat Rescuers makes that clear—but it’s also a measure of how seriously a society takes its responsibility to those without power. And it’s not a great leap to immigrant children, the impoverished elderly, abused women and poor children and teenagers.

Mahatma Gandhi said that the measure of a society is the way it treats its animals, who are voiceless and unable to fight back. And by that standard American society as a whole fails. But the work of the women and men chronicled in this film is heartening, as is the observation that there were cats in low-lying Brooklyn before 2012’s Hurricane Sandy and there are cats there now. It’s Faulknerian: They endure.