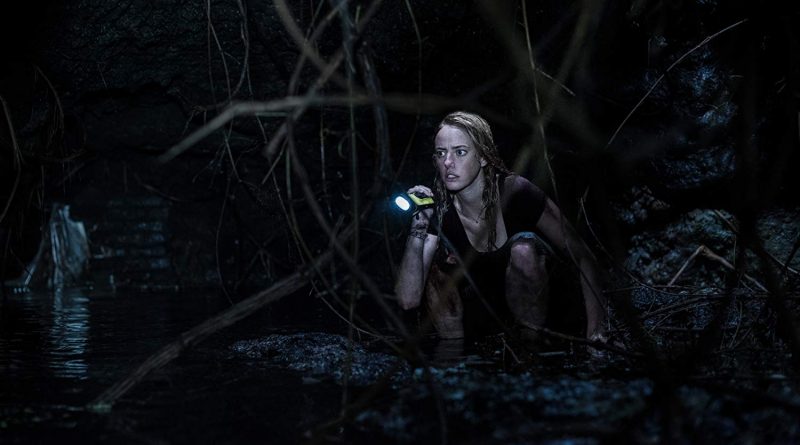 From Jaws to The Shallows, featuring Blake Lively vs. the shark – there have been a number of aquatic actioners, strategically timed to make us wary of what lurks in the water.

Relentlessly making her way down wind-swept roads, Haley spies his truck at their childhood home which is up For Sale following her parents’ divorce. After retrieving the family dog, she locates her injured dad in the basement crawlspace. He’s imprisoned by a 20-foot-long alligator that lumbered in through the storm drain pipe.

Soon, they’re both trapped down there amid the arrival of more alligators, as torrential rain threatens to flood the entire area. Can they get out? And what faces them when and if they do?

What makes it work is that the sympathetic daughter/father characters are developed with detailed specificity and impressively embodied by Kaya Scodelario and Barry Pepper. Their credible motivations are understandable and the plot is unfettered by typical clichés and pitfalls, like cloying sidekicks and gratuitous nudity.

As for the ravenous reptiles that are attracted to sound and motion, as opposed to sight and smell, I couldn’t tell which predators were real, animatronic or CGI.

Trivia: The concept was inspired by a true alligator event during Hurricane Florence. And basements are very rare in southwest Florida because most of the state is at, or below, sea level, so the ground is largely sand.

On the Granger Movie Gauge of 1 to 10, “Crawl” bites off a scary, squirming 7, becoming a truly terrifying thrill-ride, concluding with Bill Hayley & His Comets’ rendition of “See You Later, Alligator” over closing credits.