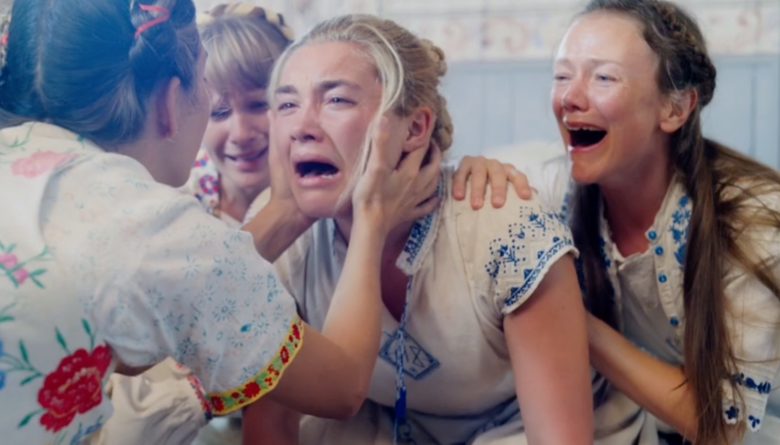 It’s impossible to watch Ari Aster’s pastoral/pagan horror film without recalling Robin Hardy’s mystery-thriller The Wicker Man (1973), set on an island in the Scottish Hebrides. Under the watchful eye of Christopher Lee, the Celtic population danced around a maypole before making a human sacrifice.

Hardy then made The Wicker Tree (2011) about an American singer and her boyfriend who run afoul of cultists in a Scottish village. I’m intimately familiar with that because my husband (James Mapes) plays a Texas preacher, and I did several interviews with Robin Hardy during the filming.

In what’s almost a Wicker Man remake, writer/director Ari Aster’s story revolves around Dani (Florence Pugh), who, in the opening sequence, is traumatized, learning that her bi-polar sister murdered their parents and committed suicide. For years, Dani has been in a rocky relationship with self-absorbed Christian (Jack Raynor).

When Pelle (Vilhelm Blomgren), a Swedish pal of Christian’s, offers them a chance to visit the remote commune where he grew up during a once-in-a-century, midsummer purification festival, they’re off with some other grad school anthropologists to Sweden’s picturesque village of Harga, which is filled with runic symbols.

Runes are an integral part of Harga’s culture. They’re an ancient alphabet, prophetically stitched into costumes, intricately carved into wood/stone and pivotal in the feasts’ dining-table arrangement. (For more lore, read Ralph H. Blum’s Book of Runes: A Compass for Navigating in Turbulent Times.)

Under the leadership of Siv (Gunnel Fred), the matriarch/officiant, everyone in Harga divides life into four 18-year divisions: childhood, pilgrimage, working and elderhood. Hallucinogens are rampant.

Since they’re unwitting ‘outsiders,’ Dani and Christian’s friends meet with horrific dismemberment and death, until Dani, as May Day Queen, must make a dreadful choice in the film’s final sequence.

On the Granger Movie Gauge of 1 to 10, Midsommar is an all-too-derivative, sadistic 6, filled with sinister, nightmarish rituals.