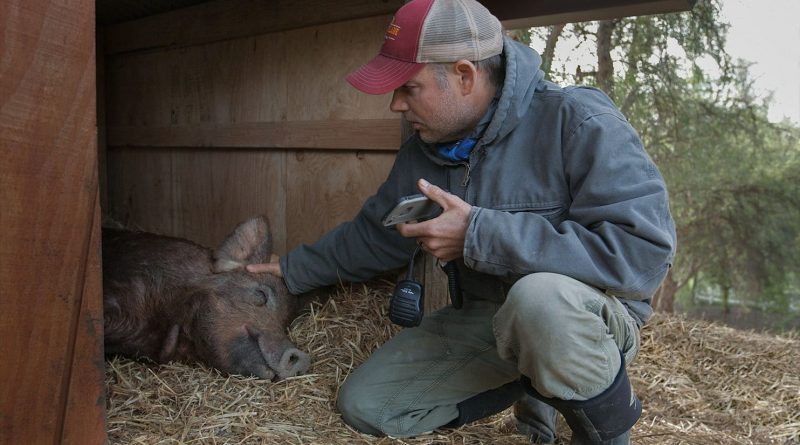 The visually stunning documentary The Biggest Little Farm chronicles the triumphs and tragedies of living off the land without giving a completely clear picture.

The Toronto Film Festival hit centers on John and Molly Chester, a wildlife videographer and personal chef/food blogger, respectively, living in a small Santa Monica, California, apartment. Their lives change dramatically when they adopt Todd, a dog rescued from the home of an animal hoarder.

When the dog’s incessant barking leads to their eviction, the idealistic couple decides it’s an opportunity to pursue Molly’s long-held but seemingly unlikely dream of starting a farm built on traditional methods, a Utopian agricultural endeavor that eschews chemicals, grows assorted crops and livestock and strives for harmony with nature.

Despite their dearth of agricultural experience – the whimsical animation by Jason Carpenter illustrates Molly’s naïve “storybook farm” vision for their new life – the Chesters buy a neglected 200-acre spread in Moorpark, about an hour north of Los Angeles, and establish Apricot Lane Farms during a record drought. They turn to traditional agriculture guru Alan York for guidance, and he has plenty of advice on how to build up the depleted topsoil, how many varieties of stone and citrus fruits to plant and how to adopt a philosophy of working with nature – and getting it to work for you.

But he also warns them that “it’s a simple way of farming. … It’s just not easy.”

Directed by John Chester, who shares writing credit with seasoned documentarian Mark Monroe (“The Cove,” “Icarus”), “The Biggest Little Farm” chronicles their eight-year journey to turn their formerly ravaged land into a thriving biodiverse farm that coexists with an equally flourishing ecosystem of wildlife. The documentary showcases his talents as a videographer as effectively as it does his growing agricultural acumen. From fascinating magnified footage of wriggling microorganisms to striking visions of the cosmos, the film is one of the most visually spectacular of the year.

The film started out as a collection of Oprah Winfrey’s Super Soul Shorts about the farm’s animals, including the Daytime Emmy-winning “Saving Emma,” about their pregnant pig, which gave birth to an astonishing litter of 17 piglets and developed a potentially fatal infection. The feature-length documentary doesn’t stint on the gorgeously lit footage of precious piglets, shaggy calves and fluffy puppies, with heartwarming tales of Emma’s relationship with a rejected rooster named Greasy, an orphaned lamb that finds a new mother and a gentle dog named Rosie who becomes the guardian of the chickens.

More importantly, the Chesters don’t skimp on relating the myriad hardships they’ve faced as farmers, including a wide array of pests and predators, the ravages of severe weather, the state’s destructive 2018 wildfires and the never-ending problem-solving and manual labor involved.  As a farmer’s daughter, I can attest that most people have no idea of the backbreaking toil and spirit-breaking setbacks involved in working the land.

But the Chesters do hold back in one key area, failing to delve at all into the financial aspects of running the kind of traditional farm for which they are clearly advocating. Except for vague mentions of investors and spending half their first year’s budget in six months, the film gives no clues as to how they could afford to keep going when the birds were eating the nectarines, the coyotes were killing the chickens and their veritable army of workers needed to be paid anyway.

Without that fiscal transparency, “The Biggest Little Farm” ultimately feels a bit too much like a glossy commercial, complete with a folksy score by Jeff Beal and a jingle, er, end-credits song by the Avett Brothers, rather than an inspirational story that others might be able to conceivably emulate.