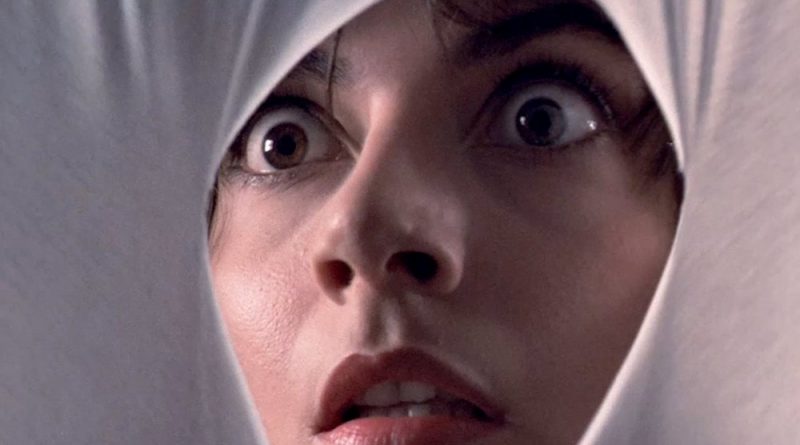 There was a time when few American moviegoers knew what giallo meant, literally or otherwise, even those moviegoers in search of boundary-pushing movies, who frequented ’70s grindhouses and fading picture palaces whose velvet seats and intricately patterned carpeting were gradually surrendering to wear and neglect. Yet even before we learned the term—it means “yellow” and originally referred to pulp novels published in Italy with distinctive yellow covers— we knew one when we saw it.

This July, we descend into the depths of giallo‘s gory glory with a fresh selection of six newly-restored films that span the genre’s cinematic ambitions and styles.

A giallo was a thriller, almost always Italian, occasionally not, that featured an intricately convoluted plot wrapped around multiple murders, eye-popping—sometimes literally—visuals, exotic (to Americans) locations and fabulous set design, powered by lush scores that defied every American rule of scoring scary movies, music that seamlessly blended Euro-disco, -jazz and -lounge. If no one has yet written a dedicated piece about the even-amazing wallpaper in gialli, that alone is an opportunity begging to be seized.

In movies like Forbidden Photos of a Lady Above Suspicion (1970; any allusion to Elio Petri’s 1970 Investigation of a Citizen Above Suspicion is no doubt coincidental), Iguana With a Tongue of Fire (1971), Luci Fulci’s Perversion Story/One on Top of the Other (1969) and Strip Nude for Your Killer (1975), there was blood, always blood, alongside a great deal more flesh than moviegoers were used to seeing in non-pornographic American films whose primary goal was to be “erotic.” And for that we could thank European attitudes about nudity and sexuality onscreen: In the 1960s and ’70s, “foreign movie” was still widely understood to mean a film in which you stood a good chance of seeing some serious nudity along with a variety of sexually oriented scenes, from strip-club acts to lovers doing what lovers do.

Ironically, at its core the giallo is a variation on the Agatha Christie/English-country-house school of mysteries, in which characters who share some connection of which they are often unaware are gathered somewhere and picked off one by one by a killer whose motives are rooted in a bygone trauma, affront or injustice, a model Alfred Hitchcock infused with intense psychosexual underpinnings. And all gialli owe an enormous debt of imagination to Mario Bava’s The Girl Who Knew Too Much (1963) and Blood and Black Lace (1964), films that bridged the gap between Christie and Hitchcock and paved the way for a bloody deluge.

Mayhem aside, gialli are driven by characters—sane and mad, male and female—who embody the dark side of Dashiell Hammett’s Flitcraft anecdote in The Maltese Falcon. Everyman Flitcraft is walking down the street on a day like any other when a construction site mishap leaves a small scratch on his face; it could easily have killed or crippled him. “He felt like somebody had taken the lid off life and let him look at the works,” Hammett wrote, a profound evocation of the wrenching reassessment that follows a shock that proves life isn’t fair or orderly or to be trusted. While Flitcraft eventually drifts back into a life much like his old one (though after abandoning his wife, job and friends), gialli are populated by characters who never regain their footing. The mouth of madness is reluctant to let go.

And they helped change the landscape of American genre films. The 1970s were a time of tumultuous changes in American filmmaking, not all of which have stood the test of time, but gialli helped bring a new sensibility to American shores—not to art houses, but to local cinemas and then television, video, DVD and streaming—one that has thrilled generations of moviegoers and moviemakers. Nightmares are discomfitingly potent dreams, and gialli are candy-colored nightmares it’s oh-so hard to resist.

EDITOR’S NOTE: New York’s Quad Cinema is presenting a screening series of six restored gialli from July 19-25. The program includes:
The Iguana with a Tongue of Fire
The Fifth Cord
Forbidden Photos of a Lady Above Suspicion
Perversion Story
The Possessed
Strip Nude for Your Killer
Please click on the titles for AWFJ’s full reviews of the films.