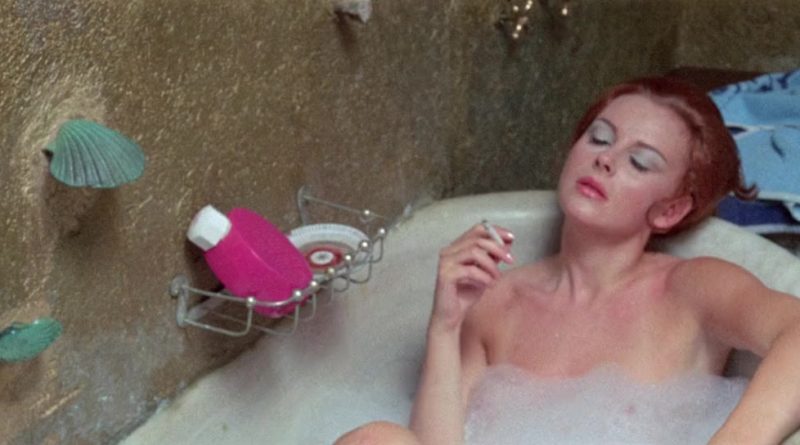 Lumbered with a title that inevitably recalls Elio Petri’s darkly cynical and intensely political Investigation of a Citizen Above Suspicion (1970), critic-turned-filmmaker Luciano Ercoli’s Forbidden Photos of a Lady Above Suspicion (also released in 1970) is at its heart a film about women on the verge of a nervous breakdown.

And not in a fun Almodovar way. Minou (Dagmar Lassander) is the definition of a mad housewife: Bored, neglected by her husband Peter (Pier Paulo Cassoni), unfulfilled, clueless and desperately restless. She has no idea what she wants to do and, it quickly becomes clear, Peter doesn’t care.

So she goes running to the shelter of her mother’s little helper: From the outset it’s clear that Minou has a prescription pill problem and that her libertine friend Dominique (Nieves Navarro), an avid collector of dirty pictures from Scandinavia, is not a good influence. But that’s only the beginning: One day while Peter is away on business Minou walks to the waterfront, intending to dine at a local fish restaurant, when she’s menaced by a brutally handsome guy on a motorbike wearing a duster—how spaghetti western!

To thoroughly parse the plot of Forbidden Photos… is a major undertaking, but suffice it to say that there’s a whole lot of creepiness going on, along with some spectacular ‘70s Euro-design, which is far from irrelevant. Minou’s description of her seducer/rapist’s loft/studio is a riot of doll parts–tiny hands, disembodied heads… it’s all seriously creepy and also thoroughly fabulous.

The film’s underlying attitudes are disturbing, but very much of a time: A man wants to rape you? You should take it as a compliment, a measure of how sexy you are. Your husband appears to be involved in some seriously ethically disturbing medical experiments? Well, that’s business for you… and to be honest, that part doesn’t feel the least bit dated.

Forbidden Photos is a thriller that takes on a whole new significance in our era of, to be honest, frightening biotechnology, in addition addressing—however indirectly—still hot-button issues related to agency, consent and larger social constructs that define a woman’s right to say, “Hell no.”