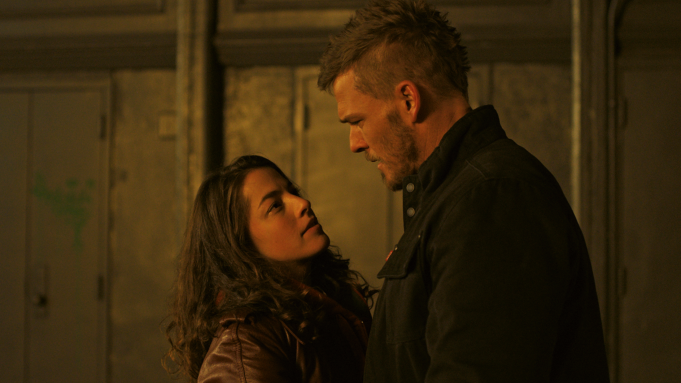 Just about everyone ends up feeling invisible at some point during their teen years — but what if you actually disappeared? That’s what happens to Holly in writer/director Claudia Myers Above the Shadows, a drama/fantasy that serves as an allegory for what it’s like to be marginalized out of your very existence. 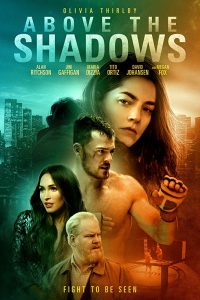 Holly’s transition into invisibility begins when her beloved mother dies; with the loss of the only person who ever really “got” her, Holly (Fina Strazza) starts to disappear from the consciousness of her father and two siblings. At first scared and confused, by the time she’s a young adult (played by Olivia Thirlby), Holly has learned to take advantage of her unique situation: Since no one can see her, she can “sneak” up on anyone, anytime — a talent she uses to snap compromising photos of celebrities, which she sells to gossip peddlers. She’s convinced herself that she’s OK alone and that her spying and manipulation are justified because the world is a cruel place.

Then one night she encounters Shayne (Alan Ritchson), a former MMA fighting champ who now toils in obscurity as a bouncer, largely thanks to photos Holly took years before. No one is more surprised than Holly when she realizes that Shayne is able to see her. They embark on a scheme to help restore his reputation — and absolve her of the guilt of derailing his life — but Holly will need a pretty big wake-up call to truly turn things around.

Myers spins a unique story in Above the Shadows, exploring grief and identity in an almost comic book-like way. Holly’s life on the fringes is well constructed, and her emotional journey is compelling. You could argue that her relationship with Shayne doesn’t need to take the direction it ends up taking (a solid friendship can be just as grounding as romance), but Thirlby and Ritchson have good chemistry, and their performances are earnest. Holly’s journey isn’t one we’ve seen before at the movies, and that helps make it stand out. — Betsy Bozdech

Marilyn Ferdinand: The protagonist in Claudia Myers’ drama Above the Shadows is not only invisible, but also unheard. She started fading at the age of 10, just after her mother died, and is unremembered by her family. Myers challenges us to look at ourselves through the eyes of others and drop our self-centered grievances long enough to see what other people may be going through. Myers’ script is ingenious and her direction of her actors masterful in making scenes with a supposedly invisible character work. Read full review.

Marina Antunes The theme of “being seen” weaves through many movies but in writer/director Claudia Myers’ Above the Shadows, the theme is taken quite literally as we meet Holly, a young woman who loses her mother as a child and slowly begins to disappear until one morning, she wakes to find that no one can see her. The fanstastical element of Myers’ film makes for an interesting visualization of a concept that is sometimes hard to grasp and it allows her to tackle some interesting ideas about everything from self-worth to dealing with grief. Grounded in reality by a great performance from Olivia Thirlby who is well matched with Alan Ritchson (best known for his physical performances, he does quite well here with some emotional moments), Above the Shadows is sometimes on the nose but ultimately, a hugely enjoyable and effective tale of self-discovery.

Leslie Combemale Loss changes us. Sometimes we face that, sometimes we don’t. That’s something new indie release and winner of the audience award at the Brooklyn Film Festival Above the Shadows explores. A fantasy anchored in the reality of 21st century daily life, it is the story of Holly, (Olivia Thirlby) who, after losing her beloved mother, fades out of sight over time. Read full review.

Jennifer Merin Claudia Myers’ Above the Shadows is a fantasy-infused drama about Holly, a young woman (Olivia Thirlby) who (literally) faded from sight during her childhood, following the death of her beloved mother. No longer seen nor heard, she is soon completely forgotten by her father, siblings, classmates and teachers, and goes up to be an isolated individual who uses her invisibility to support herself by taking embarrassing (invisible fly-on-the-wall) photos celebrities and, selling them (anonymously) to the tabloids. She’s lonely and has no sense of hope for her future. Eventually, her intrusive professional antics are observed by a nightclub bouncer, Shayne (a hunky Alan Ritchson), whose former career as a successful MMA fighter was bashed by Holly’s salacious photos that also ended his marriage to super model (Megan Fox). Yes, there’s a lot of story, but with writer/director Myers’ skillful handling, the narrative makes sense and flows freely. Fine performances by Thrilby and Ritchson make the invisibility fantasy real enough for us to think about the trauma that marginalized — invisible — people experience.

Nikki Baughan: Writer/director Claudia Myers brings a sci-fi bent to the very real-world traumas of loss and grief in this story of a young woman who finds herself turned invisible after the death of her beloved mother. While some of the narrative elements are a little blunt-edged, some atmospheric world building and strong performances make for an interesting watch. Olivia Thirlby, who has previously impressed in the likes of Dredd and The Senator, is excellent as Holly who, following her mother’s death, becomes literally invisible to her family and the world around her. Over a decade later she is scratching out an isolated existence as an anonymous tabloid photographer when she comes across Shayne (Alan Ritchson), a nightclub bouncer and former MMA fighter who can actually see her. Reasoning that their fates are intertwined, Holly sets out to help Shayne rebuild his life in the hopes that it might do the same to hers. There are echoes of Netflix’s Russian Doll in the premise, and Thirlby’s heroine is as immediately intriguing as Natasha Lyonne’s Nadia Vulvokov. It’s a shame, then, that Holly’s personal journey to acceptance involves giving so much focus to helping Shayne realise his true potential – and, of course, falling in love at the same time – but Thirlby’s moving, nuanced performance effectively mines the immense and long-lasting psychological damage that the death of a parent can wreak.

Nell Minow: You might think that the combination of a delicate fantasy with MMA fight scenes would not work, but Claudia Myers brings it together seamlessly, with a sure sense of story and tone.

Sheila Roberts Fantasy is a magical and entertaining genre. Viewers are required to suspend disbelief to follow the narrative and some may have difficulty doing so. That said, the film sticks to its premises and does not disrupt the universe it creates. Myers also makes an important point drawn from her experience growing up, which is that even marginalized people who feel misunderstood and overlooked can find a constructive purpose in life, and that in order to be seen, you have to be willing to see others. It’s noteworthy that she made Above The Shadows in 21 days on an extremely limited budget and set up shots in 26 locations across all five boroughs on some of the busiest streets in New York City. That’s an incredible logistical challenge for any director. Read full review.

Cate Marquis Like most good science fiction/fantasy, Claudia Myers’ Above the Shadows is really about our world and the people who live in it. Actually, it is more a fairy tale or parable than science fiction, so analyzing how her invisibility works is pointless. You just have to go with it, but Above the Shadows will reward you for that journey. Read full review.

Title: Above the Shadows