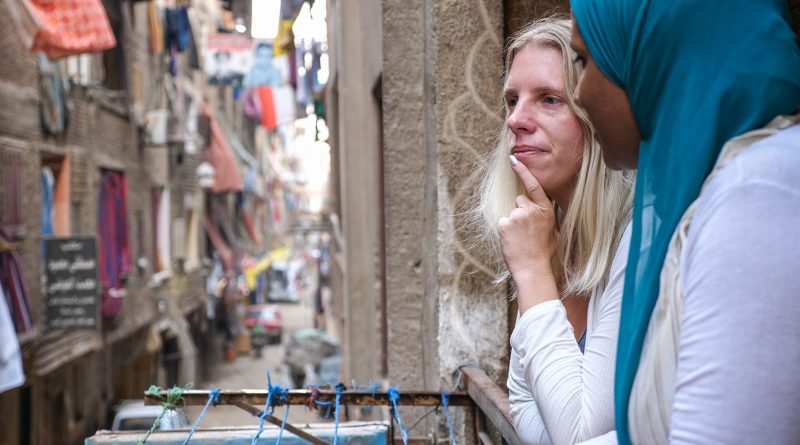 “The world seems crazier each day – with people full of distrust. Suspicion, demonization, polarization and racism seem rampant,“ observes Canadian-Egyptian entrepreneur Tarek Mounib. “If a country like America, always a world beacon of freedom and tolerance, is eliciting such racist rhetoric, is there any hope?”

Perhaps recalling that Mark Twain said, “Travel is fatal to prejudice bigotry, and narrow-mindedness…” Mounib, decided to offer seven working-class Americans, who support the Muslim ban, a chance to make an all-expense-paid, 10-day visit with his friends in Cairo.

In preparing this documentary, producer Tarek Mounib and director Ingrid Serban carefully matched the diverse American guests with the Muslim hosts, who had their own preconceptions about Americans.

Moubib’s goal was to connect people in kindness instead of fear, stressing the importance of listening, especially to those you may disagree with, or you may think have nothing in common with you.

“I had no idea what was going to happen,” recalls Mounib. “We encountered conflict, but we all came together and connected. People are really the same wherever you go…We just need to treat each other the way we teach our children to treat each other in kindergarten.”

Five separate camera crews follow the different journeys, joining together only for tourist visits to the pyramids and the Egyptian museum.

As the husband in one Jewish couple notes, “It’s completely different here than our news media tells us…my mind is turned over.” Their poignant experience turns out to be profoundly life-changing.

On the Granger Movie Gauge of 1 to 10, “Free Trip to Egypt” is an intriguing 7. And Tarek Mounib urges viewers to go online to take the #PledgeToListen.