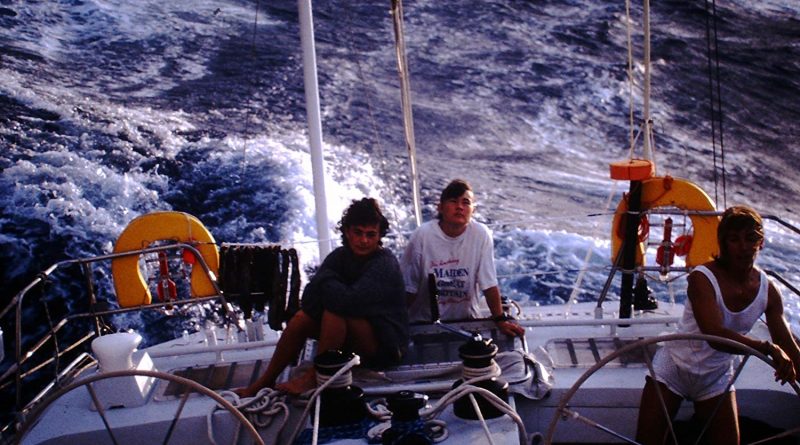 As Alex Holmes’ exciting documentary begins, the camera captures a blustery day on the roiling sea with Tracy Edwards’ voiceover warning: “The Ocean is always trying to kill you. It doesn’t take a break.”

And British sailor Edwards should know. Back in 1989, when she was in her early 20s, she mortgaged her home to restore an old boat that she re-christened Maiden. She then assembled the first all-female crew to enter the grueling, nine-month, open sea Whitbread Round the World Yacht Race, now known as the Ocean Race.

As a rebellious youngster, she ran away from home in the aftermath of her father’s death, settling in a seaside town. Since girls weren’t allowed to crew, she managed to get a job as a cook/cleaner on a yacht. At that time, this was considered enough of a sexist oddity to warrant a TV human-interest spot.

Mixing archival footage with insightful interviews and wry social commentary, featuring Edwards and her competitive crew members, Alex Holmes has come up with a fascinating sports tale, filled with surprising suspense. Unfortunately, the only area he doesn’t explore his how Edwards accumulated enough sea-faring knowledge to catapult directly from cook/cleaner to yachting captain.

But Holmes and skipper Edwards make point that sponsorships were so difficult to acquire that she eventually went to King Hussein of Jordan for funding, having befriended His Highness years before when she was a lowly deckhand.

Once committed to racing Maiden on a 33,000-nautical mile voyage from 1989-90, Edwards was beset by other problems, including mocking, misogynistic journalists who referred to the Maiden as “a tin full of tarts,” the departure of her highly qualified cohort Marie-Claude Heys and the brutally grueling passage from Uruguay to Australia in which temperatures dropped down to -20 degrees.

On the Granger Movie Gauge of 1 to 10, Maiden is an empowering 8, a rousing, real-life feminist adventure.