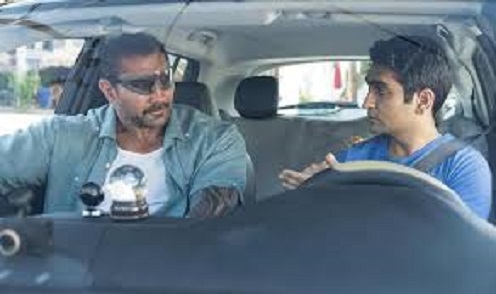 Kumail Nanjiani and Dave Bautista team up in the latest entry in the odd couple/buddy action-comedy genre.

For months, Vic (Bautista), an LAPD narcotics detective, has been tracking his former partner’s killer Teijo (Iko Uwais), a major link in the local heroin chain. Unfortunately, the day he gets a tip on Teijo’s next big drop, he’s just had Lasik surgery, meaning his eyes are unable to focus.

Frantic, he flags down chatty, conscientious Stu (Nanjiani), who supplements his low-level job in a sporting-goods store by working as an Uber driver in a leased electric car with the vanity license plate FIVESTAR. Hence the nickname Stuber.

Eager to romance his best-friend/business partner Becca (Betty Gilpin), Stu is initially quite reluctant to help Dave catch the baddies. Gradually, as time goes by, Dave bonds with mild-mannered Stu, who is so enthusiastic for a five-star rating that he suddenly finds himself an accessory to multiple murders.

So endearing in the semi-autobiographical The Big Sick (2017), Pakistani-American Kumail Nanjiani once again uses his nerdy charisma to make the most of a sketchily-scripted character, cleverly complementing gruff, grizzled, former WWE wrestler Dave Bautista (Drax the Destroyer in Guardians of the Galaxy).

On the Granger Movie Gauge of 1 to 10, Stuber is a silly 6. Can Lyft compete?