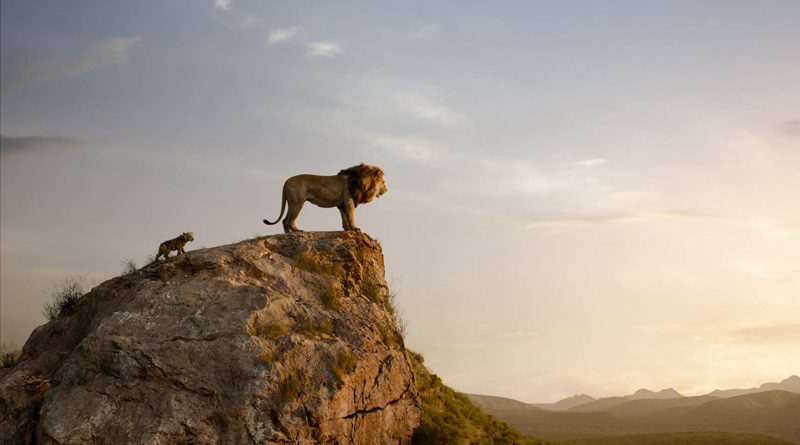 Why another“Lion King after the original animated feature (1994), the Broadway musical adaptation (1997) and more than 20 spinoff international productions? Because new, eye-popping photo-animation makes the fable look as if it’s live-action.

Computer animation has become so advanced, so realistic that the result is “virtual cinematography,” meaning the African animals look as if they were photographed on-location. Credit veteran cinematographer Caleb Deschanel, working with visual supervisors Robert Legato and Adam Velez, who previously collaborated with director Jon Favreau on The Jungle Book.

Awhile later, after young Simba warbles “I Can’t Wait to Be King,” conniving Scar lures him into a steep ravine where malevolent hyenas launch a wildebeest stampede. After making sure Mufasa takes a fatal plunge, treacherous Scar slyly convinces Simba that it’s all his fault – leaving him no choice but to flee.

Meanwhile, sneering Scar and his scavenging hyenas turn the fertile Pride Lands into a barren desert.

Eventually, Simba’s best friend/betrothed Nala (Beyonce) convinces him to return to assume his rightful role as King, musically cuing “Can You Feel the Love Tonight?” Augmenting Hans Zimmer’s score with songs by Elton John and Tim Rice, Beyonce introduces a new song “Spirit” which, inevitably, will be Oscar-nominated.

Unlike the original 1994 film, all the lions are now voiced by actors of African descent. And the no-nonsense monkey Rafiki, the King’s trusted aide, is embodied by John Kani, a South African actor.

On the Granger Movie Gauge of 1 to 10, The Lion King is a vivid, nostalgic 9, an astonishing continuation of “The Circle of Life.”