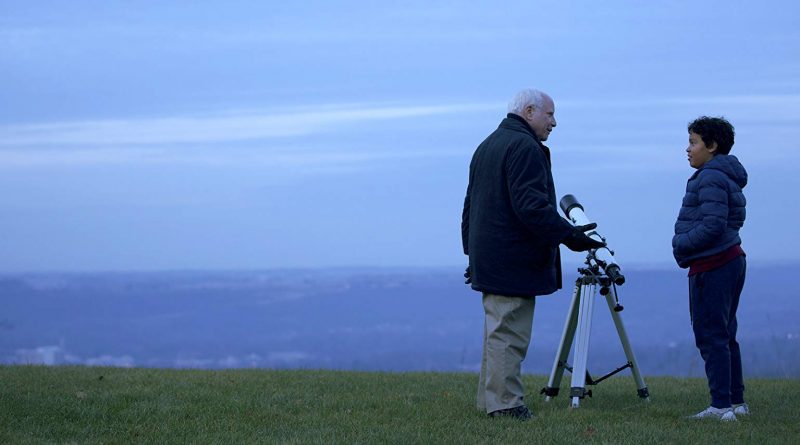 With the 50th anniversary of the Apollo moon landing all around us, it seems more than fitting that Astronaut, the first feature from writer-director Shelagh McLoud, is above all a meditation on and a reminder of that all of those men and women who have slipped the surly bonds of Earth will, just like the rest of us, die.

Angus (Richard Dreyfuss) is an aging engineer who always longed to go into space. Due to health problems, Angus has moved in with his daughter, grandson, and son-in-law, the latter of whom isn’t crazy about Angus joining their household. When Marcus No-Last-Time (Colm Feore), an entrepreneur that every critic will describe in terms of Elon Musk, announces a lottery that will take the winning civilian on the first commercial space flight, Angus — at the urging of his grandson — enters. Then Angus, who spent his life engineering roads and bridges, spots a problem with the runway.

McLeod falls into some of the traps that lie in wait for many first-time directors. She has an overwhelming fondness for slow pans and still frames — not a problem in and of itself, but her over-reliance on the techniques deadens the moments where they would be powerful. Her script, though, is where many of Astronaut’s weaknesses lie. It requires a suspension bridge to hold up a viewer’s disbelief: To begin with, The Bachelor has stricter requirements than the central contest. Tropes trip her up as well: precocious kid, silent but wise Indian. Angus could be a typical grieving widower, but Dreyfuss’s skill neatly avoids that cliché.

Still, McLeod shows great potential, and when Astronaut soars, it really nails the landing. In one scene, Angus encounters workers filling potholes on a crumbling road and says “these roads were only meant to last 15 or 20 years, you know.” Then McLeod cuts to Angus walking across a stone bridge that’s clearly been there for centuries. Some things are built to last.

What lasts and what’s left behind is the central theme of Astronaut. Marcus wants a lasting legacy of bringing space travel to the masses (well, the masses who can afford it). Angus has spent his life developing things that will, after either 15-20 years or after centuries, crumble. But going to space? That’s something that lasts longer than the strongest bridge. Life will end, Astronaut reminds us, even for those who have seen the Earth from space. Angus is acutely aware of this and, like all of us, wants to leave something that lasts longer than himself.

Astronaut isn’t an entirely smooth ride (tired of all these aviation analogies yet?). There are intriguing glimpses of McLeod’s very real talent and potential; if she finds a better script and gets control of her tendency toward the overwrought, her next project might really fly.