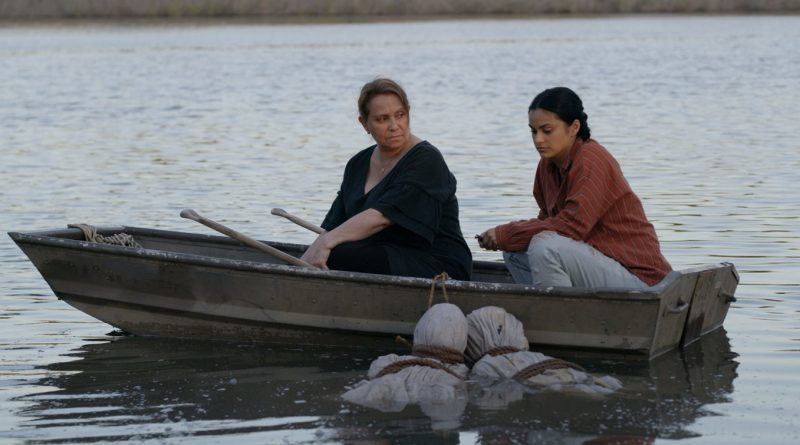 The thriller Coyote Lake takes the conceptual frame of vigilante justice and places it over a mother-daughter story about familial control and abuse, a combination that nudges at themes of religious obsession and misandry. The result is a tense experiment that considers the extremes of revenge but that overall doesn’t stray too much from a recognizable depiction of maternal manipulation.

17-year-old Ester (Camila Mendes) lives with her mother Teresa (Adriana Barraza) on the outskirts of a deserted Texas town near the border of Mexico, near Coyote Lake (inspired by the real-life Falcon Lake, a reservoir on the Rio Grande). Town is an 8-mile walk away, and their home—in which they advertise rooms for rent—is set back from the road and partially hidden by trees and overgrown foliage. But still, people find it: coyotes who have abandoned the people who paid them and who are looking for a place to stay a night; drug smugglers who want to take a break before the next part of their journey. Nearly everyone who stumbles across their home is a bad man, and Teresa and Ester have plans for bad men.

It goes like this: They agree to rent a room to the man in question. They prepare him a meal. And whatever he eats and drinks happens to be loaded with sleeping pills and tranquilizers, so he doesn’t fight when the women search him, steal whatever money he has on him, tie him up into a tarp or a sheet, and then throw him over the edge of their small wooden boat into nearby Coyote Lake. When the man wakes up, he’ll already be drowning, moments away from a certain death that Teresa has brainwashed Ester is justified. The world is a better place without these men in it, and if Teresa and Ester benefit from his money, so be it.

The long-term plan, Teresa assures Ester, is to move on from Coyote Lake one day and start a new life. There seems to be nothing wrong on Ester’s part with this bucolic idea—until two men show up at the house, the younger Paco (Andres Velez) waving a gun and the older Ignacio (Manny Perez) bleeding from a gunshot to his thigh. They’re involved with drugs, and this time, they are the ones holding the women hostage. It’s a shift in power dynamics to which Teresa thoroughly subjects but that also opens up Ester to considering a different way of thinking and a different way of life. Every component of her life has been dictated by Teresa, by her strictness and by her martyrdom and by the slaps she rains upon Ester when her daughter displeases her. Now that Teresa isn’t the one making the decisions, what does that mean for Ester?

Filmmaker Sara Seligman isn’t particularly coy about the monstrous nature of what Teresa does, but she keeps the focus on her reactions as an individual woman to the violence and chaos around her. There are only rare deviations from Teresa and Ester to Mexican cartels across the border or to struggling migrants who pass by the women’s home, and although those moments are brief, they do enough to shade in the threats these women face—and to add doubt as to whether Teresa’s motivations are as justified as she claims.

Barraza is impressively unwavering in her performance of Teresa, layering in her iron will and potential for cruelty with what is very clearly an obsessive love for her daughter, and her shadow looms large. She treats nearly everyone in the world as her enemy, and she exerts enough menace with her performance that you’ll believe that she could outsmart any man or woman she comes across.
Mendes’s performance, then, is primarily reactive to first her mother and then to Paco, and she is believable as a stunted young woman increasingly aware that not everything she’s been taught her whole life is quite right. Her character journey is inherently recognizable, in particular how she sees her mother in a new light because of the urging of a man, but that doesn’t diminish what Mendes does with the material. She demonstrates subservience to her mother with an easy deception of others, and Mendes deftly balances the character’s easy manipulation and a series of late reveals that implode her sense of self.

Seligman’s film could work in conversation with another horror film from this year: The Octavia Spencer project Ma, in which a woman still processing the violence and trauma inflicted upon her adolescent years attempts to create a family unit devoted to revenge. Barraza is operating on the same wavelength as Spencer’s Ma, who was so sure that all of her awful acts were in service of something greater, who imbued her vengeance with such meaning that she thoroughly convinced herself she was justified. The way Seligman demonstrates to us the selfishness of that worldview is through shots of Coyote Lake itself from inside, as we see what litters the depths of that body of water. Her use of the murkiness of that space to mirror the truly hazy motivations of Teresa and Ester is an intentional and effective move, and although Coyote Lake doesn’t deviate too much from the narrative you would expect, it’s the details Seligman incorporates throughout that make this thriller a promising debut.