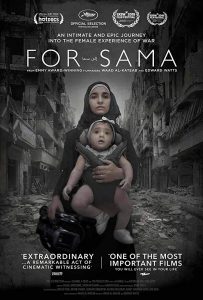 The titular Sama is Al-Khateab’s young daughter, who was conceived and born during the war while her parents used their skills — Al-Khateab as an unflinching journalist and her husband, Hamza, as a resourceful doctor — to support the Syrian opposition forces, who were fighting against the Bashar al-Assad-led government and its Russian allies. Although Al-Khateab and the film take a staunch anti-regime position, For Sama is ultimately less about politics and policies than it is about the harsh realities of war.

Al-Khateab structures the film carefully, introducing viewers to the adorable Sama, then unspooling the story of how her parents met, fell in love, and ultimately created her. Al-Khateab narrates as she goes, sharing her inner thoughts and doubts honestly — was it crazy to bring a baby into such a dangerous situation? — but always returning to the fact that she felt bound by love and honor to stay in Aleppo and try to help its people. Of course, she can’t help all of them; there are shocking, visceral scenes of the wounded and dead, including children.

Images like those are likely to leave many viewers in tears, but there are also moments that prompt smiles — friends joking amid the rubble and chaos, a happy wedding day, the birth of a much-loved baby. One of the things that’s so powerful about “For Sama” is how it shows that, even amid relentless violence and sadness, life really does go on. That said, it also makes a clear case for why so many people fled the horrendous violence in Syria, seeking safety for themselves and their children. It should be required viewing for anyone who’s ever turned their back on a refugee. — Betsy Bozdech

Nikki Baughan: Heartbreaking to the point of being almost unbearable, For Sama is also the most essential piece of documentary filmmaking to come out of Syria in recent years. Filmed by life-long Aleppo-resident Waad Al-Khateab (who shares director credit with Edward Watts), it’s an unflinching look at day-to-day life in the city as it’s racked by civil war. As Waad and her doctor husband Hamza scratch out a life in the city’s ransacked hospital, doing their best to help those who need it – and there are many, young and old – the hand-held camera tracks the unrelenting daily assault of injury, life and death. If the horror is unremitting, it’s made even more poignant by the fact that the film is constructed as a letter to Sama, Waad and Hamza’s infant daughter, born as the bombs fell around her. Waad knows that she has not made the easiest choice in staying in Aleppo and, through her images and measured voiceover, attempts to explain her reasons directly to her child. It’s a powerful approach, and brings home the human cost of conflict like nothing else. A difficult watch, undoubtedly, but For Sama is the most unmissable film of the year.

Loren King “We never thought the world would let this happen.” That’s the haunting phrase from 26-year old filmmaker and activist Waad al-Kateab, who chronicles her life during the five years that her beloved city of Aleppo, Syria was destroyed by the corrupt government of Bashar al-Assad. If not turning away is how we must confront the violence, inhumanity and senselessness of war, this brutal, heart-wrenching film is essential viewing. Read full review.

Susan Wloszczyna: Never mind all those so-called superheroes that have dominated movie screens for the past two decades. Now is not the time for escapist fantasies. For Sama is the reality wake-up call we as a country desperately need right now, one that shows what happens to a society when corruption, injustice and oppression goes unchecked. Is this a political documentary? Yes. As a young and engaging female Syrian university student, Waad al-Kateab decided to chronicle on camera the uprising of the Aleppo citizenry against a cruel self-serving regime and the resulting horrifying devastation when Russia and Syrian leaders terrorized the community with constant terrorist bombings by air and on the ground. Read full review.

Marilyn Ferdinand: Life, love, loss, and rebirth. The civil war in Syria is something most people living in Western countries don’t understand, if they know anything about it at all. It’s the oldest story in the world, and yet so particular. Waad al-Kateab, mother of toddler Sama, tries to explain to her daughter why they are living in a war zone by means of a video diary Waad began making at the start of the student revolt against the long dictatorship of Bashar al-Assad in 2011. The carnage is nauseating, but the exhaustion of living with daily shelling and bombing feels almost worse as we learn what a fight for freedom against a ruthless, well-equipped regime actually takes. For Sama is unforgettable.

Marina Antunes Waad al-Kateab’s journey began when she moved to Aleppo to study but the young journalist soon found herself reporting to the world from the middle of a war zone. At first, the fight for freedom kept her in Aleppo, and then she fell in love and got married but why did she and her husband stay after having a child? Presented as a diary to her daughter, For Sama compiles five years of footage shot by al-Kateab into a visual document in which the journalist and mother tries to provide answers as to why she decided to stay but it also acts as one of the most visceral and heartbreaking accounts of life in a war zone. It’s one thing to see stories of the soldiers and fighters but al-Kateab’s unfiltered experience provides necessary insight into what war is like for the innocents caught in the crossfire; the men, women and children who are trying to survive. For Sama is difficult to watch but essential and should be mandatory viewing before any move to engage in war.

MaryAnn Johanson What an extraordinary rebuke to the idea popular in certain circles these days that if you don’t like what’s happening in your country, you should leave it. Waad Al-Khateab’s powerful diary — at once personal and journalistic — is an incredible testament to defiance and resilience in the patriotic fight to defend one’s nation and one’s culture from oppressive bullies. And it’s also a heartbreaking testimony of what it means to be a civilian in the middle of war zone; Al-Khateab’s perspective as a wife and mother and her ruminations on the impossible decisions one must make about what is best for one’s family when one is fighting for the future are incisive. A wise, beautifully observed, and inspiring film that, I fear, has too much to say to those of us in the West worried about the dangerous paths our own nations seem to be heading down.

Jennifer Merin For Sama is a reality-based horror film, a harrowing first person documentary in which the filmmaker, Waad Al-Khateab, a Syrian woman journalist, chronicles her daily life and struggles to survive during the Battle of Aleppo. Waad states that she is making the film for her daughter, Sama, who was conceived and born during the five-year siege that devastated her home town. The film is intended, she says, to let Sama know who her parents were, what they believed in and why they joined the rebels who were fighting for freedom from the repressive regime of Bashar al-Assad. For Sama is essential viewing. Read full review

Leslie Combemale The new documentary release For Sama is an intensely emotional and visceral film co-directed by Syrian journalist Waad Al-Khateab that will likely stay with audiences far beyond the viewing of it, possibly even for a lifetime. It is a chronicle of Waad’s daily life during the uprising in Aleppo. Dedicated to her daughter Sama, it is meant to convey the complicated experience of balancing being both a parent and a freedom fighter. There are so many personal, terrifying scenes, with death, joy, faith, and sadness shown in fearless and feminine fashion. She is communicating with raw honesty, forcing hard questions from viewers as they witness both the widespread destruction and close up intimate scenes from the more joyful moments of her life. Is bringing new life into the world a loving thing to do in the midst of war? Can a mother keep her child safe and at the same time fight to make it safe and worth living, even if it puts them all in danger? This multi-award winning film is the sort of epic story that will have viewers flashing back on it for months. It is gut-wrenching but essential viewing.

Sheila Roberts Told from a female perspective, Waad’s intimate and compelling video diary, “For Sama,” is intended as a love letter to her young daughter, Sama. It offers a rare look at Waad’s life during five years of uprising in Aleppo as old lives are swept away and a rebellion once portrayed as a civil war evolves into a Western-backed regime change operation. Waad falls in love, marries a doctor who is also a media activist, and gives birth to Sama amidst an escalating conflict which she documents daily with her camera. Clearly, this is no place to raise a child. Read full review.

Sandie Angulo Chen: Documentarian and citizen journalist Waad al-Kateab’s heart-wrenching film For Sama is both an intensely personal and universal story. It’s an intimate chronicle of her personal life throughout the five years of the Syrian civil war, specifically in Aleppo, the ancient city where she was first a university student and then a rebel, wife, and mother (her husband Hamza is the chief doctor of a volunteer-run hospital). The movie may have started as a tribute to her baby daughter Sama, it is, like Ta-Nahesi Coates’ collection of essays Between the World and Me, a relevant and thought-provoking tale for the entire world. This is an incredibly difficult documentary to watch. Waad, who took daily footage on her phone and then a Sony digital camera, captures many bloody and traumatic scenes, particularly those of dying or dead children – all casualties of the siege. Get your tissues ready and watch this extraordinary film (co-directed by Edward Watts), which is a lesson in empathy, courage, and the cost of freedom.

Cate Marquis A young Syrian woman, Waad Al-Khateab, set out to create For Sama as a sort of video diary for her young daughter Sama, about her mother’s college days, meeting her father, falling in love, and their early life. It all sounds so ordinary and sweet – except that this story takes place in Aleppo during the seige. Read full review.