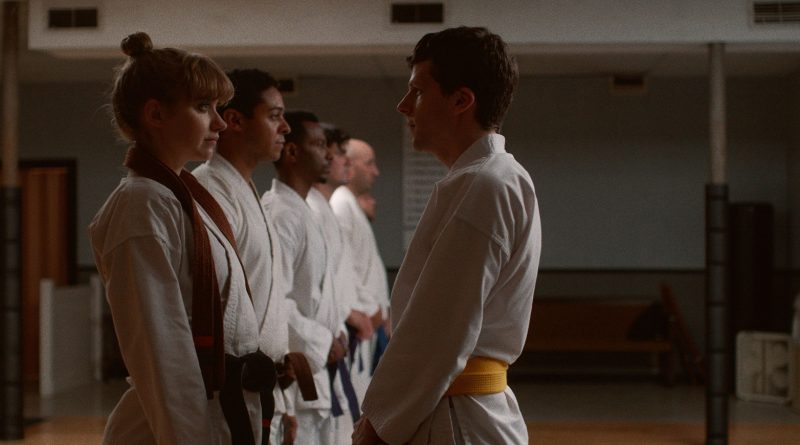 As unexpected and hard-hitting as a kick from a hand or a punch from a foot, “The Art of Self-Defense” effectively spars with toxic masculinity while delivering a throat punch to familiar underdog sports drama tropes.

Oscar nominee actor Jesse Eisenberg (“The Social Network”) gives a pitch-perfect lead turn as Casey, an anxious, socially awkward accountant who struggles to talk trash with the guys in the breakroom, goes home to a sadly drab apartment and has only a tiny, adorable dachshund for companionship.

After he is beaten and left for dead by a roving motorcycle gang, Casey is desperate to protect himself and cope with his fear. So, he enrolls in a strip-mall karate school, where he is intrigued by the enigmatic Sensei (Alessandro Nivola) and attracted to the bold brown belt Anna (Imogen Poots), the dojo’s lone female member.

The disciplined structure of karate gives Casey a newfound sense of belonging, empowerment and achievement, especially when Sensei quickly promotes the newbie to yellow belt. Aspiring to his teacher’s stoic self-confidence, he eagerly follows his sensei’s advice to pursue hyper-masculinity and dominance in all things.

Once he joins the dojo’s exclusive night classes, where sparring is swapped for bloodsport, Casey starts to realize just how warped his sensei’s teachings are.

With a combo of dark, dry satire and sudden, shocking violence, Stearns’ “The Art of Self-Defense” lands some canny punches as he fights absurd notions of modern masculinity, misogyny and isolation.