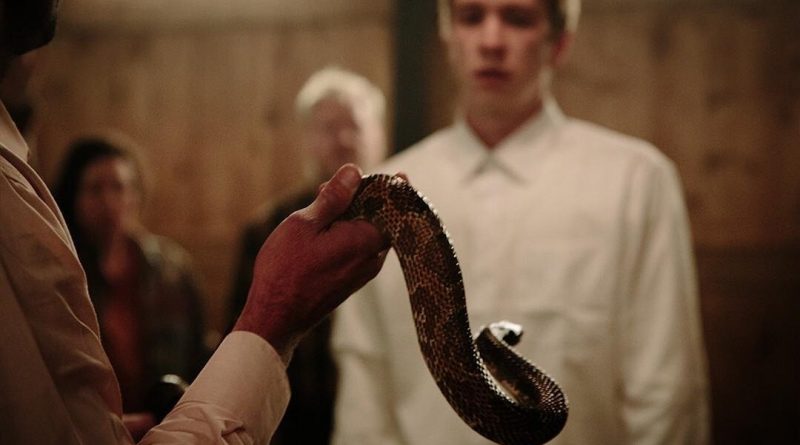 The “them” in the title refers to the fundamentalists who believe that handling snakes will prove their faith to their judgmental godforce. In a sect deep in the woods of Appalachia, a preacher guides his daughter Mara, meaning “bitter,” toward heaven, or his definition of heaven, not hers.

Mara is infatuated with Augie, so infatuated that she is impregnated, a secret she bears with woe. Augie does not follow the faith. He scoffs at it so Mara has to remind him that it’s not just her father’s practice but hers as well. She shows him a nest of vipers and glories in the beauty of the writhing mass.

Mara’s mother died, leaving her to handle growing up. She has a close friend, Dilly, whose mother has run off. She has a boyfriend, whom her father wants her to marry. His mother is a matriarch in the congregation, the one who inspects brides for virginity. She smokes. The men drink and curse. As a womanchild in a strongly patriarchal cult, Mara must wash the feet of her man just as she washes the dishes, scrubbing away sin like crust.

Alice Englert, an Australian actor so fine in Ginger and Rosa, does a good job of showing how beaten down such women can be, but such a role — in life and in film — does not exude much drama, enveloped as it is in the long, thick denim skirts meant to make the women undesirable. Her friend is played by the ingenue Kaitlyn Dever, recently of Booksmart. Augie is played by Thomas Mann, and his mother by British actor Olivia Coleman with an Oscar from The Favourite. The minute she appears on screen, the film is starched. Walton Goggins plays the preacher, more subdued than his role in Justified. Even Jim Gaffigan has a role.

Britt Poulton and Dan Madison Savage wrote and directed Them That Follow, their cameras telling viewers exactly where to look. Don’t expect anything as deep as Daniel Woodrell wrote in Winter’s Bone, or any of his Ozark noir, but do expect to be illuminated about a part of American culture caught in Christian cul-de-sacs of cruelty toward women.