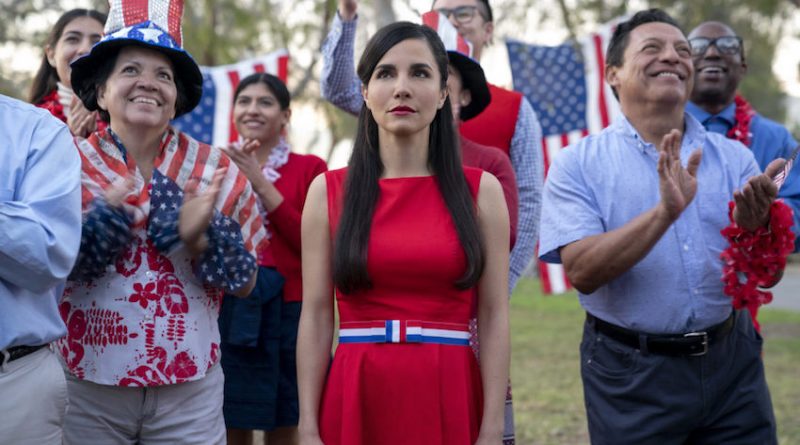 For those who keep their eyes keenly peeled on horror shorts with the hope of spotting exciting emerging filmmakers on their inevitable ascension to feature filmmaking, Gigi Saul Guerrero has been a name to watch for some years. Having made a number of shorts previously, last year’s web series La Quinceañera only continued to solidify her reputation as a filmmaker to watch.

With the latter playing Montreal’s Fantasia International Film Festival last year, Gigi and her team at Luchagore Productions have excelled beyond what even optimists might have hoped for her feature film debut, Culture Shock, which recently had its international premiere at the 2019 incarnation of the same festival.

Made as part of Blumhouse Television’s anthology series Into the Dark on Hulu, each of its twelve feature-length, stand-alone episodes correlates with a significant North American holiday or festival. Despite recent controversy about Jason Blum’s perceived disinterest in hiring women directors, despite Blumhouse’s involvement in earlier features with Karen Moncrieff and Catherine Hardwicke, Into the Dark is clearly trying to remedy this assumption. As such, the 4th of July themed Culture Shock can be seen as setting a new trend when considered in relation to other episodes including Sophia Take’s New Year, New You, Chelsea Stardust’s Mother’s Day, and Hannah Macpherson’s forthcoming Daughter’s Day.

With an explicit political message kicking in with an intensity and intelligence comparable to Joe Dante’s legendary 2005 Masters of Horror episode Homecoming, Culture Shock instantly reveals its ideological intent with its heart-wrenching and hugely sympathetic portrayal of a pregnant Mexican woman called Marisol (Martha Higareda). After an initial failed attempt with her partner Oscar, she regardless remains determined to make an illegal border crossing into the United States.

Driven by a desire to raise her child in a better country, despite warnings from numerous people that she has an idealized vision of the United States, Marisol is a strong-willed young woman who has made up her mind. With her baby due in only days, she grabs the opportunity when it arises, and the fraught, hazardous journey begins.

Divided into three distinct sections, this is a filmmaker with immense control over tone and form, using light, editing and mise-en-scène to communicate the extreme shifts in Marisol’s circumstances as much (if not more) than plot and dialogue. Supported by an exceptional cast – Higareda most notably, with cult horror icon Barbara Crampton also packing in an unforgettable performance – there is not even the slightest hint that the shift from short to long form filmmaking was anything less than natural.

Never missing a beat, there is a dynamic, electrifying energy to Culture Shock that while always pounding along at a satisfying pace, never risks losing its fundamental empathy for its central protagonist.

It is this spirit of empathy that makes Culture Shock such an unforgettable and important horror film. There is no subtext here; it would take some determined, dedicated ignorance to miss how the film’s title refers to the immigrant experience, where desperate people trying to change their lives for the better are forced to accept a new culture at the expense of one’s original one, shattering their sense of identity and self.

Culture Shock is a manifesto, a warning, and a vision of an alternative way of being in the world for those on either side of the border. It is a fearless and compassionate horror film about immigration that is both urgent and timely.