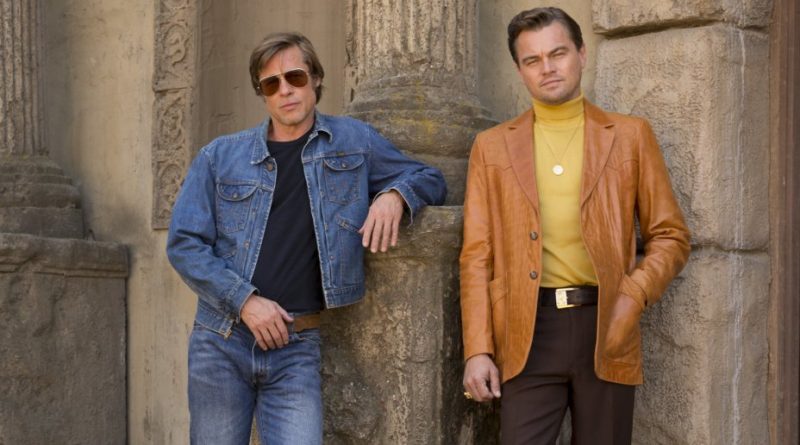 Writer/director Quentin Tarantino—what more need I say to establish the appeal, or lack thereof, for his latest self-indulgence, Once Upon a Time . . . in Hollywood. At two hours forty one minutes, the film riffs through a medley mashup of Tarantino’s favorite 1969 television series and cinema, all anchored to fading star Rick Dalton and his stunt double Cliff Booth.

Signaling this film’s ubiquitous homages to multiple, beloved productions, the title itself alludes to Sergio Leone’s spaghetti westerns. In that regard, as Dalton’s career unwinds, he heeds advice to head to Italy for a rejuvenated star turn since in L.A. he’s relegated to playing the guest appearance heavy on popular shows. Meantime, Cliff hangs around, runs errands, gets into trouble on the set, or, as our surrogate, affectionately observes Hollywood’s iconic signs, restaurants, and historically recreated city blocks while driving the license-suspended Dalton. It’s a nostalgic indulgence in what seems to be a more idyllic time.

Within the ying and yang of Rick’s and Cliff’s personas, Tarantino recreates several real films and shows (The Great Escape, The Wrecking Crew, Mannix). Moreover, even though Rick and Cliff are fictional, he teases with the specific dates and details of Charles Manson’s Spahn Movie Ranch cult and the murders on Cielo Drive. And even though other notable actors play real people: Sharon Tate (Margot Robbie), Roman Polanski (Rafal Zawierucha), Steve McQueen (Damian Lewis), Bruce Lee (Mike Moh), Tarantino plays it for laughs, especially his final, surrealistic scenes. This is both his signature and his offense to anyone taking the known horrific violence as more than an excuse for humor.

In publicity, Brad Pitt says that this is Tarantino’s love letter to Hollywood. It is that, and also a love letter to Pitt and DiCaprio who clearly relish playing their roguish characters. Cinematographer Robert Robertson’s camera lingers on and caresses Pitt, his considerable talent and iconic body on full display, courtesy of Tarantino. DiCaprio has the more volatile role, segueing through a wide range of reactions: anger, disbelief, tears, and affection for Cliff. In supporting roles, Al Pacino, Bruce Dern, and Margaret Qualley beautifully chew the scenery. Songs define and do a lot of the work of many scenes. Once Upon a Time . . . in Hollywood really is, with apologies to Faulkner, a lot of sound and fury, essentially signifying nothing.