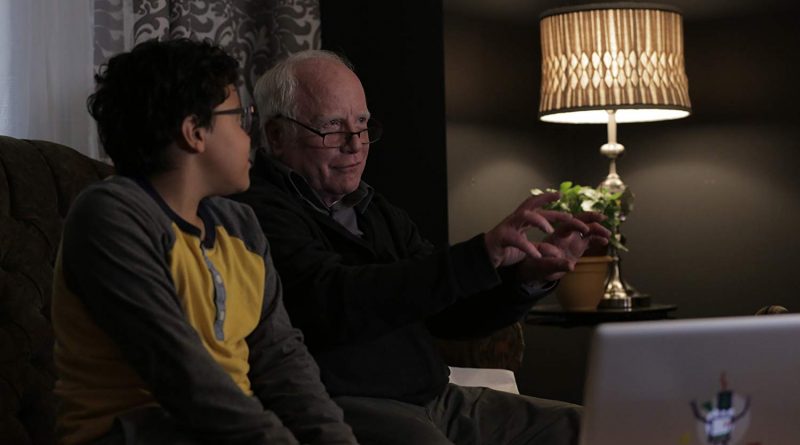 As children, we’re encouraged to dream big. We’re told that we can become anything we put our minds to. As we get older, sometimes those dreams are put on hold; life swoops in and takes us in a different direction but those childhood dreams don’t always die, they get buried under the reality of life. Shelagh McLeod’s feature film debut Astronaut, explores the story of a man who gets to live his childhood dream in his twilight years.

Richard Dreyfuss stars as Angus, a widower and retired civil engineer in his eighties who harbours a passion for the stars. Circumstances have forced him to move in with his daughter and her family, a living arrangement which has brought tension to the family so when Angus’ son-in-law Jim (Lyriq Bent) suggests moving Angus into a care home, grandpa goes without argument. When a billionaire launches a contest to send a civilian into space, Angus dreams of fulfilling his life-long dream of being an astronaut and so he enters the contest and is subsequently selected as a finalist which launches a series of events that affects both the impending space mission and Angus’ personal life.

Astronaut, which McLeod both wrote and directed, is a kind of marvel; a movie that on the surface sounds like a sappy, forgettable drama about an old man going to space. Instead, McLeod’s balance of family drama and space travel are perfectly matched and just as the movie starts to tip into the saccharin, she sidesteps to tackle another aspect of the story that keeps the movie moving along.

A great script is a good place to start but Astronaut certainly benefits from a talented cast, leading with Dreyfuss who perfectly embodies Angus. The family drama unfolds mostly between Angus and his son-in-law Jim and grandson Barney, played by Lyriq Bent and Richie Lawrence respectively. They are wonderfully matched. Lyriq is particularly great as Jim; much of his character’s development is internalized but the growth feels authentic and the final scene between Jim and Angus is emotionally resonant.

There are parts of Astronaut that could easily derail the movie – the donkey side story is only one of them – but McLeod works all of the threads into an intimate tale about keeping your dreams alive while also tackling more difficult themes related to aging including losing a spouse, failing health, family tension, and disenfranchisement among others.

Some may be disappointed that Astronaut isn’t really a space movie but the concept of “old man going to space” provides McLeod an opportunity to explore other aspects aging in a framework that is unique, and the final product is both touching and inspiring.