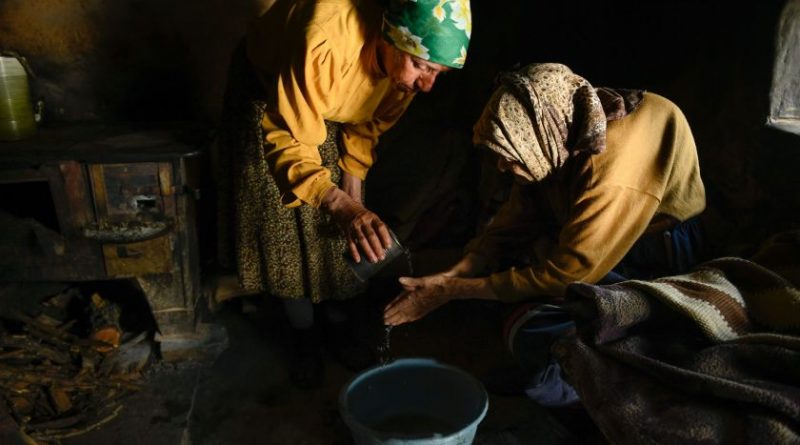 Tamara Kotevska and Ljubomir Stefanov’s documentary “Honeyland” tells the compelling story of Hatidze Muratova, a Macedonian beekeeper whose quiet rural life with her ailing mother is upended by the arrival of an itinerant family, complete with seven children and a herd of cattle. Intimate and immersive, the film captures a place so removed from Western hustle and bustle that it almost feels like another century. 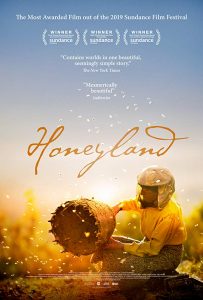 Hatidze is an expert in using traditional methods to lovingly tend to her swarms of bees — and gently part them from the luscious honeycomb they produce, which she sells in the capital city of Skopje. Her only company at home is her mother, Nazife, who is bedridden and frail. So when the Sam family, led by father Hussein, arrives, Hatidze is initially happy to have company, despite the chaos they bring to her corner of the world. She bonds with some of the children and teaches the whole family about her beekeeping methods. But not everyone in the family is content to do things they way they’ve always been done.

Honeyland is a beautiful film — both physically (the cinematography is lush and lovely) and emotionally. Hatidze’s story is one of patience and care, diligence and love. She tends to her bees with the same affection that she does Nazife; like her mother, the bees are a constant in her life, and she would never dream of hurting them or abusing their trust. It’s clear that Hatidze’s life isn’t an easy one — she works hard, year-round, to eke out her living — but, most of the time, it’s one that makes her smile her infectious grin.

Kotevska and Stefanov do an excellent job of documenting Hatidze’s life without intruding; you may have to remind yourself that another person was there, with a camera, filming during several of the film’s quieter, intensely personal moments. That intimacy is what helps make Honeyland so powerful.– Betsy Bozdech

MaryAnn Johanson Honeyland is an extraordinary film: beautiful and terrifying, cautionary and celebratory, wise and innocent. Our heroine here, Hatidze Muratova, is a canary in the coalmine of our collapsing natural environment and a prophet from the past with an accidental message of how we can do better. I was powerfully moved by every aspect of this film, from its startling reminder of the deprivation that so many people still live in even in the early-mid 21st century to the hearty, resilient dignity and beauty we find in Muratova’s struggle, and in her person. Such a deeply humane film, one that prompts us to explicitly seek out the humanity in the people around us, and yet also an expansively planetary one, evoking a sense of all of us as part of a much larger natural world in which we are — or should be — not takers but merely caretakers.

Nikki Baughan: An extraordinary documentary both in terms of subject and craft, Tamara Kotevska and Ljubomir Stefanov’s Honeyland is an immersive and deeply moving portrait of the delicate balance of life and traditions in rural Macedonia. Their focus is 50-something Hatidze Muratova, a female beehunter who lives in a remote stone hut and spends her days carefully rearing bees and selling their honey, while also caring for her 85-year-old mother. When a large family of nomadic Turks roars up next door, their own amateur beekeeping activities threaten the natural harmony of the landscape. By taking a traditional unobtrusive fly-on-the-wall approach, without any talking heads or on-screen information, Honeyland thrusts the viewer into this little-seen world, allowing us to feel, rather than simply observe, the intricate ebb and flow of life in this beautiful, challenging wilderness. The filmmakers are helped in this regard by stunning cinematography from Fejmi Daut and Samir Ljuma and expert editing from Atanas Goergie, which together bring both visual scope and dramatic intimacy.

Pam Grady: In a remote area of Macedonia, bee hunter Haditze tends to swarms of the wild insects in their natural habitat. She respects the bees and understands their existence as she extracts half the honey they produce to sell in town, leaving the rest behind to keep the colonies healthy. Then an itinerant farmer and his family move in next door and he, too, decides to keep bees—heedlessly ignoring Haditze’s expert advice to the peril of all the local bees and Haditze’s living. That is the setup of this fascinating documentary that began as a short that would document the remarkable Haditze and her fiercely independent (if lonely) life. That changed when the Sams moved in, bringing with them a bigger story and melodramatic shading. The film operates on multiple levels: as a biography of the woman at its center, a window into a remote part of the world and the subsistence existence eked out by the people that live in it, and a study of the fragile ecology of bees. Gorgeously shot, it brims with empathy for Haditze and her neighbors while underlining the jeopardy that awaits when humans disrespect nature.

Leslie Combemale Honeyland is built on a foundation of an intimate connection between filmmakers and subject. Documentarians Ljubo Stefano and Tamara Kotevska craft a feature centered on the last in a long line of wild beekeepers, Hatidze Muratova. Muratova lives a simple, yet peaceful life with her ailing mother, and survives by farming honey in small batches. She is careful to operate in a sustainable way, showing great respect for the bees, their care, and a shared human/creature environment. A large itinerant family shows up with farm equipment, a passel of children, and a herd of cattle, and immediately threaten the delicate balance needed to keep the bees safe and alive. It is a film that exposes universal loneliness and betrayal of trust, and the essential need for respecting biodiversity. It also recognizes simple pleasures appreciated by people the world over. The filmmakers truly capture what is at stake for both humanity and nature, when we ignore the world around us through our own greed. Audiences may be cognizant that women like Muratova exist, but being put face to face with her and the daily life she leads would recalibrate the compassion of even the most jaded, self-absorbed audience members.

Sheila Roberts Honeyland is a riveting, deeply human story about a vanishing way of life. Kotevska and Stefanov enjoy a comfortable rapport with their subjects who appear natural and at ease revealing themselves in front of the camera. It makes for a breathtaking cinematic journey that’s not to be missed. Read full review.

Jennifer Merin Honeyland is an extraordinary ethnographic observational documentary that shows us the joys and hardships in the daily life of Hatizde Muratove, a traditional beekeeper who lives with her ailing 85 year old mother in a stone house in the mountains of rural northern Macedonia. Their quiet subsistence lifestyle of love and respect for tradition and the land is disrupted when an itinerant family with five unruly kids and and a small herd of cattle move arrive, set up camp and start to collect honey from Hatizde’s lovingly tended bees. With superb craftsmanship and aesthetic sensitivity, filmmakers Tamara Kotevska and Ljubo Stefano chronicle this life-changing rivalry. Absolutely stunning cinematography of the land, the people and the bees transports you to an almost other worldly environment. This fascinating cinematic journey is not to be missed.

Susan Wloszczyna: The best saints are those who would strenuously deny that they are one. That is because their basic humanity is so hard-wired inside their being, they don’t have to think about how to treat others or how to not abuse what Mother Nature has provided us. Kindness, consideration and decency are just how they roll, no matter the hardships and negativity that might arise in their lives. Honeyland‘s central character, Hatidze Muratowa, a traditional beekeeper in rural Macedonia is one such. Read full review.

Nell Minow: Directors Ljubo Stefanov and Tamara Kotevska show the same infinite patience and care in telling the story of their subject, a Macedonian beekeeper named Hatidze, that Hatidze shows in caring for her bees. The simple intimacy of their storytelling is matched by the exquisite framing of their images, lit by sun and candle. The directors let the story unfold naturally, so that they encompass the world, from the big abstractions like economics and culture to the smallest, most personal longings of the heart.

Liz Whittemore From the opening shot of Honeyland, you know you’re in for something spectacular. This cinema-verite doc explores the ancient art of beekeeping and perhaps a good vs evil look at industrialization. Hatidze cares for her aging mother and lives off the occasional 10 euros she receives per jar of honey her wild bees create. The mutual respect she has cultivated with the bees over the years is spun into disarray when a large, rowdy family moves in next door. Taking advantage of her kindness and expertise, they decide to shirk the old ways and haphazardly dovetail on her sacred small success. This documentary is a beautiful look at the delicate balance of power between the old and new world. It highlights the best and worst of the human spirit. In a way, the filmmakers show how Hatidze is like bees she cares so much for.

Cate Marquis Honeyland is a documentary but it plays out so much like a narrative film, a touching drama, perhaps even an epic, that one has to remind oneself that it is documentary. There is no introductory text at the start to tell us who she is or where we are, and there is no voice-over. Instead it is just the fly-on-the-wall camera, some strikingly beautiful photography, and a dramatic story that unfolds like a narrative film, with moments of drama, of humor, and an unspoken message about cultural change and caring for the earth. Read full review.