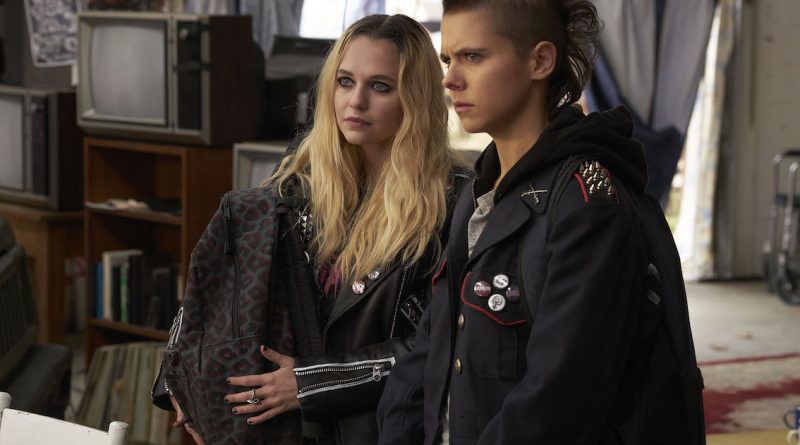 Jovanka Vuckovic is a familiar name to horror fans through her legendary run as editor of the beloved Canadian film magazine Rue Morgue. Through a series of initial shorts – most notably the award-winning 2012 film The Captured Bird, which included Guillermo del Toro as an executive producer – Vuckovic’s status as a filmmaker to reckon with was further developed by her inclusion in the 2017 all-women directed horror anthology XX, alongside filmmakers including Karyn Kusama, Roxanne Benjamin, and Annie “St Vincent” Clark.

With its recent North American premiere at the 2019 Fantasia International Film Festival, Vuckovic’s feature debut Riot Girls is set in a future where the adult population has been decimated by a plague kids have remained immune to. Riot Girls makes Vuckovic’s punk sensibility explicit not only through its very title (riffing on the underground 90s riot grrrl movement), but by the subcultural styling of its two central characters, Scratch (Paloma Kwiatkowski) and Nat (Madison Iseman).

A queer teen love story told through the lens of the dystopian gang warfare trope, Riot Girls is often-visceral and consistently high-energy. Vuckovic strips back the 80s ‘jocks vs. freaks’ teen film structure to reveal it for what it is; a battle between spoiled aggressive rich kids and more independently minded free spirits. With the former rendered as nothing less than neo-fascist domestic terrorists, a war breaks out when the geographically-based factionalization results in an abduction.

Driven by a fierce soundtrack, Katherine Collins high-octane script and an euphoric sense of experimentation with the formal limits of what a teen film can be, Vuckovic’s comic book structural motif only adds to the unrelenting exuberance of Riot Girls. With women helming cinematography, screenwriting, editing, and production design duties alongside Vuckovic’s confident directing, Riot Girls is the liberating force of breaking free of conservative gender roles both in front and behind the camera.