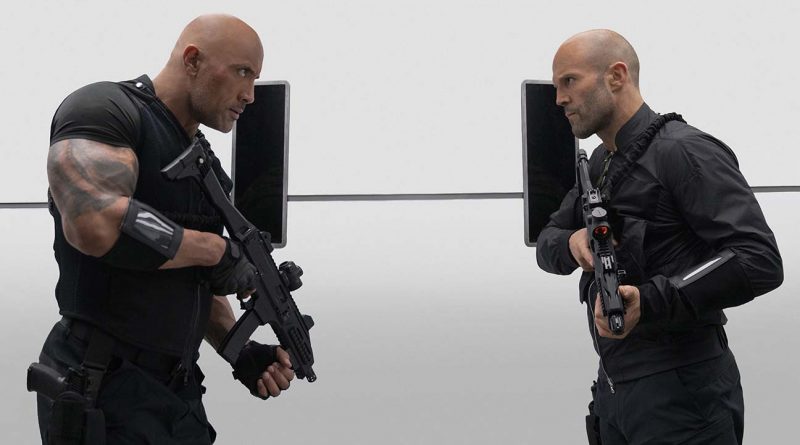 Just when it seemed impossible to top the outlandish stunts from 2017’s The Fate of the Furious, like that spectacular nuclear submarine and car racing sequence on the arctic tundra, along comes Fast & Furious Presents: Hobbs & Shaw to make your head spin all over again.

Directed by David Leitch (Deadpool 2 and John Wick), Hobbs and Shaw is an offshoot of the enormously successful Fast & Furious series and stars Dwayne “The Rock” Johnson (San Andreas 2) and Jason Statham (The Meg) in the title roles as Luke Hobbs and Deckard Shaw.

Hobbs and Shaw picks up two years after The Fate of the Furious and it doesn’t take long for the fireworks to go boom. That’s because these two have never, ever liked each other. Shaw, a former British Special Forces assassin-turned-mercenary has been at odds with DSS Federal Agent Hobbs ever since he hauled him off to prison.

Well, a series of events force Hobbs and Shaw to work together this time to help bring down an MI6 field agent named Brixton Lore (a terrific Idris Alba). Brixton has gone rogue and due to a potent virus has become this cyber-genetically enhanced superhuman, aka, “Black Superman.” Brixton has incredible powers and is determined to get his hands on every ounce of the virus so he can wipe out much of the planet and develop fighting machines like him who will rule the world.

Here’s the kicker: Deckard’s estranged sister Hattie (a scene-stealing Vanessa Kirby) has stolen some of the virus from Brixton and she’s now high on his list.

But don’t let the pretty face fool you. Hattie doesn’t need her big brother to protect her. She’s a tough cookie and proves she can hold her own alongside the big boys. In fact, her fights scenes are among the best in the movie.

When Hobbs and Shaw meet up with Hattie, they know she’s an asset and she soon becomes part of their team. Plus, there’s no way that Shaw is going to leave his sister out on her own with some maniac gunning for her. Family means everything — which is why Deckard’s mother Magdalene (the delightful Helen Mirren) shines with her brief cameo and why Hobbs heads to Samoa to reunite with his kinfolk. They’re willing to protect him at all costs from Brixton and his crew.

At first blush, Hobbs and Shaw may seem like your run-of-the-mill actioner, but it manages to serve up a few new wrinkles; make that many wrinkles, thanks to some outlandish, headshaking, tricks and stunts. The most impressive ones include a helicopter being lassoed from the air and some motorcycles that bend, but don’t break. It’s all rather silly and ridiculous, but it’s still a real kick to watch it unfold.

The relentless action that has Hobbs, Shaw and Hattie jet-setting to London, Russia and Samoa can be a bit dizzying at times. However, it’s the macho chemistry between “The Rock” and Jason Statham and their slinging of funny insults, that makes Hobbs & Shaw a welcome debut and an overall fun and pleasing popcorn movie. This is the start of something good.