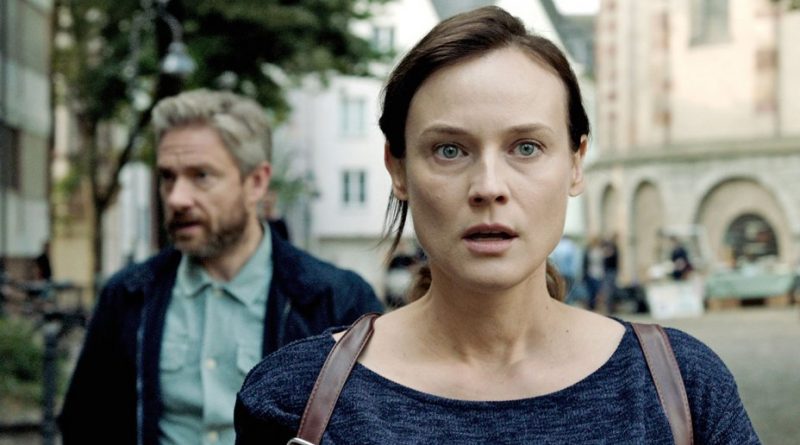 Truth be told, I usually enjoy almost any spy film; The Spy Who Came in from the Cold, Bridge of Spies, and Three Days of the Condor among my favorites. But sometimes I want to like a film more than it merits. That’s how I felt watching The Operative, with its cloak-and-dagger twists and turns amidst disjointed development.

The story hinges on Rachel Currin, a woman recruited by the Mossad, assigned a handler, and planted in Tehran as an English and French teacher as her cover. While there, Rachel must steal vital information about Iran’s nuclear program, with the primary goal to eventually sell that country defective nuclear technology. As the film begins, Rachel resurfaces after a year’s silence via a perplexing phone call, thereby posing a monumental crises. Her contacting Thomas, her previous handler, ropes him back into the spy network that must unravel Rachel’s activities.

Her invented persona is soon proven no more fabricated than the one she presents as genuine. But, then, she is a double agent, so it seems to come with the territory. To add intrigue and context, more complications are revealed as the narrative cuts back and forth in time and place: Cologne, Leipzig, Tel Aviv and Tehran. But it all feels more contrived than coherent. Writer/director Yuval Adler does keep the two hours moving briskly, with the strongest appeal from the outstanding lead actors, notably Diane Kruger as Rachel, Martin Freeman as Thomas, and Cas Anvar as Farhad, the Iranian insider targeted.

Kruger, in particular, dares the camera to reveal exactly what she’s thinking, plotting, and hiding. She and Freeman, equal to the task, clash and connect in complex ways. They’re a joy to watch, two accomplished stars enjoying the complicated developments characteristic of a spy story. The music effectively encourages emotional interpretation in several scenes, but The Operative gets lost in its own machinations and clichés too much for me to highly recommend it, unless you’re as easy an audience for spy films as I am. In English and German, Persian and Hebrew with English subtitles. Check listings.