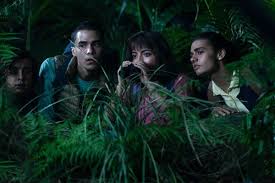 This live-action adaptation of the popular animated Nickelodeon series resembles a kid-friendly Indiana Jones adventure, opening with the logo: “Everything you are about to see is true. Except that foxes don’t swipe. That’s a hurtful stereotype.”

As her story begins, perky 16 year-old Dora (Isabela Moner) is living with her zoologist mom (Eva Longoria) and archeologist dad (Michael Pena) in their idyllic Peruvian rainforest cottage where she’s spent her childhood being home-schooled.

But now that her explorer parents are embarking on a perilous trek to find Parapata, the fabled Inca city of gold, Dora is dispatched to Los Angeles to live with her aunt and uncle, only to discover that Silverlake High School is another challenging jungle with its own indigenous people.

Then, during a school field trip to the Natural History Museum, Dora and her pals are kidnapped by treasure hunters who are determined to track down Dora’s peripatetic parents.

Dora’s hyper-stylized pet monkey Boots (voiced by Danny Trejo) is back, along with Swiper (voiced by Benicio Del Toro), the sneaky fox.

FYI: When Dora made her debut on Nickelodeon in 2000, she became the first animated Latina heroine in a show that included Spanish-speaking characters.

On the Granger Movie Gauge of 1 to 10, Dora and the Lost City of Gold is an endearing, nostalgic 7, filled with fresh fun for the entire family.