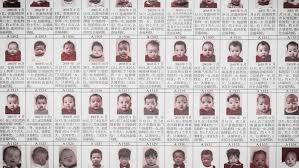 One Child Nation, co-directed by Nanfu Wang (who also narrates) and Jialing Zhang, is a gripping, thought provoking, deeply personal examination of the impact of China’s one-child policy that lasted from 1979 through 2015. Wang, who was born in China in the 1980s and later emigrated to America, began shooting the film not long after she gave birth. Through moving interviews with Wang’s own family, former midwives and family planning officials, artists, journalists, and human traffickers, Wang exposes a disastrous 35-year social experiment that had tragic consequences for multiple generations. Based on the belief that population control was essential to China’s survival, millions of unwanted babies were abandoned, aborted, or killed after inducing labor in response to strictly enforced government guidelines. In a society where every life decision is made for you, it’s hard to feel the consequences. Some interviewees expressed regret but felt they had no choice but to obey. Others said they would do it again because it was their duty to put the national interest above their personal feelings.

Among the many excellent interviews, one of the most fascinating ones for me was with artist Peng Wang who was very moved by what he saw during that era and wanted to capture it in his work. In one of his projects called “Motives,” he painted fetuses on a book entitled The Thoughts of Chairman Mao. There was the image of one fetus for each page on 365 pages, suggesting this was something happening every day. For him, it was about the fragility of life and the respect every life deserves. He wanted people to think and to ask themselves how could we do this and why? “As a human being, it takes guts to kill a person,” he says, “especially for young nurses. How could they bring themselves to kill? What made them do this?” He believes it all came from long-term indoctrination which destroys a person’s humanity, individuality and conscience.

The one-child policy required individual submission to the collective good of the many, and it was aggressively promoted on billboards, murals, school books, and in songs and dramatic presentations. “We are fighting a population war” was a common slogan used in the government’s national propaganda campaign to legitimize the policy and enforce the public’s cooperation. For those who failed to comply, there were serious consequences, including enforced sterilization and abortion. The situation was exacerbated by a strong cultural belief that boys were more valuable than girls because they could carry on the family name. This led to appalling human rights violations, especially for unwanted baby girls, many of whom were abandoned in the streets, marketplaces or garbage dumps where they died from exposure. Other babies were sold to orphanages for international adoption often against their family’s will.

“One Child Nation” is a powerful indictment of a savage policy that inflicted immense pain and suffering on Chinese society. Today, every trace of the one-child policy is being erased, but the memory of this national trauma remains in the minds of those who lived it. As Wang points out, China started a war against population growth but it became a real war against its own people. As a result of this failed exercise in social engineering, men in China now significantly outnumber women, and there are not enough young people to work and take care of an aging population. Wang is struck by the irony that she left a country where the government forced women to abort, then moved to another country where governments restrict abortions. “On the surface, they seem like opposites, but both are about taking away women’s control of their own bodies. I want my son to have a sibling like I did, but I want that decision to be my own.”

Wang is a masterful filmmaker who delivers a well-crafted, tightly paced, and informative documentary. The cinematography by her and Yuanchen Liu is stunning. The delicately complex score by Nathan Halpern and Chris Ruggiero complements the film but never overwhelms. This Sundance award winner is an important film for audiences to see.