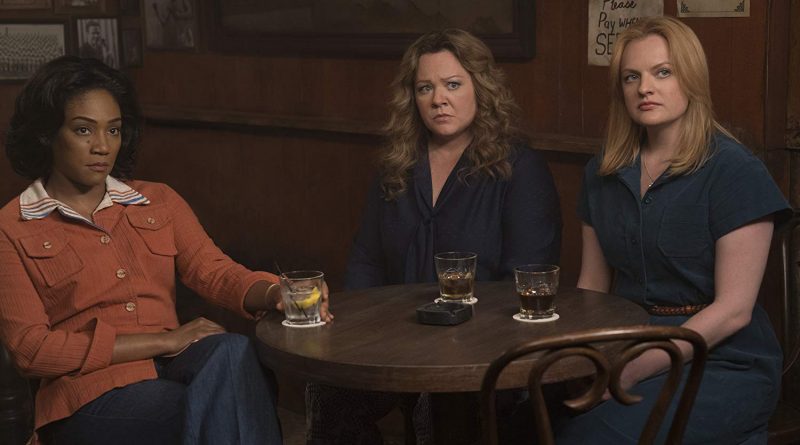 Whereas The Nightingale takes place in 19th century Tasmania, The Kitchen is set in the 20th-century in the part of New York controlled by the Irish, the “micks.” Men run protection rackets, that is, extorting money from merchants on the promise that the mob will keep the cops out of their retail hairs. However, three men in the mob are sent to the hoosegow, leaving their wives at the mercy of the mob for support.

It’s not enough money for Clair (Elisabeth Moss), Kathy (Melissa McCarthy), and Ruby (Tiffany Haddish). They think that they can bring a maternal quality to the protection racket and actually fulfill promises. This also means they have to be tough mothers. The Kitchen provides, if nothing else, a lesson in dismemberment. Take notes, people.

One of the problems with The Kitchen is that the stars have been known to be comic. That means it takes a while to register that The Kitchen is not a comedy, not a joke, not one bit funny. Well, there is Margo Martingdale trussed up like Divine in drag, and she steals scenes like a gangster. Members of the supporting cast include the Irishman Domhnall Gleeson, the Italian Annabella Sciorra, and the African-Americans Common and Brian d’Arcy James.

Director Andrea Berloff does not hesitate to let the blood run, the bullets burst, or the plot twist. She wrote the script with Ming Doyle and Ollie Masters from the comic book series. Be warned: f bombs detonate with c and t bombs throughout. The Kitchen is not a fine film, but it has its deadly serious skirmishes between the sexes and the immigrant populations in New York City.