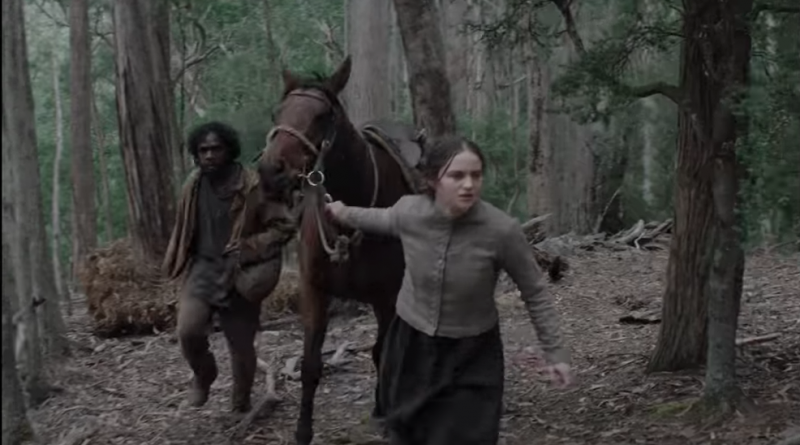 The Nightingale, a strong, hard film set in the wilds of Tasmania in 1825, begins with a sweet-voiced Irish woman singing to her moon-faced baby. The next sound erupts from soldiers making hateful, sexual comments about women, especially this one who sings amidst their grimy suggestions.

Clare, the songstress, is an Irish convict awaiting release papers from a sadistic lieutenant. He rapes her. Then, the lieutenant seeks a promotion he was promised, so he lights out for town. He and his men have also said hateful things about the “blacks,” the Aborigines, but the officers need one to guide them through the wilderness.

Clare follows her rapist, seeking revenge. She, too, has to accept a guide into the woods, a man named Billy, a black man, who stands beneath even her, a convict, a woman.

If The Nightingale were just about that time in history, that place, it would signify. But it is also about timeless issues of race and class and gender. It is about a man who must humiliate himself before his superiors and, in turn, treats those beneath him like night soil. The film offers symbolism, for, as Clare is the nightingale, Billy is the Blackbird. In this fairy tale, the woods are dark and deep, and death lurks around every moss bank. Cinematography by Radek Ludczuk highlights the forbidding and symbolic woods.

Aisling Franciosi from Game of Thrones impresses as Clare, all grief and love and anger. Sam Claflin from The Hunger Games plays the horrible lieutenant. Baykali Ganambarr plays the Aborigine — he is very good in his first role.

Director Jennifer Kent, known for the scary film, The Babadook, keeps her cameras on Clare’s face as she is violated or on the ceiling. The cameras never veer toward the phallic instrument of torture, for someone has decreed that shooting that symbolic spear would relegate the film to pornography.

If the threat of violence keeps you from this remarkable film but not from the recent, violent film The Kitchen, consider that films like 12 Years a Slave and Saving Private Ryan also showed nearly intolerable cruelty and death, but, unlike The Kitchen, they were worth it. So is The Nightingale.

This is Martha Baker with a KDHX film review of The Nightingale.