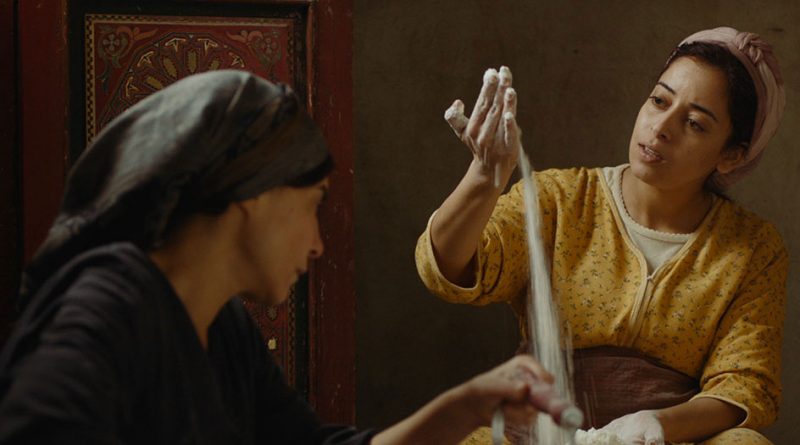 The film begins with the close up of a woman’s face in the middle of what appears to be an informal job interview at a hairdressing salon in Casablanca. There is clear anxiety and relief on her face when she is invited by an off-camera voice back the next morning for a trial, but when she asks if she can sleep that night in the corner of the salon, the voice of the unseen authority figure changes almost immediately and she is sent away.

The woman is Samia (Nisrin Erradi), who we discover when the camera pulls back is heavily pregnant. Reduced to door knocking on random houses begging for domestic work, luck continues to desert her until she meets eight-year-old Warda (Douae Belkhaouda), who is being raised by her single mother Abla (Lubna Azabal). Despite her initial coldness, with some encouragement from Warda and the voice of her own conscience, Alba invites her in.

Running a bakery from her home and selling her products out of her kitchen window, despite Abla’s initial insistence that Samia’s stay is limited only to one night, this time period extends as Samia’s undeniable skills as a cook immediately benefit for Abla’s business. Just as importantly – and far more complex – is the relationship that develops between the two women as Samia moves ever closer to giving birth.

Adam is an intimate, confident portrait of a friendship that blossoms in a social context where shame and social acceptance dominate how women see themselves and others. Combining a warm but never patronizing screenplay with perfect casting of its three central roles, Touzani’s film maintains a strong emotional core while never slipping into clichéd representations of women and their relationship to work, motherhood and each other.

Based on the filmmakers own experience as a young pregnant woman who arrived on her own family’s doorstep, the film in many ways feels like a genuine and heartfelt love letter not to a broad social type, but to a very specific woman that Touzani herself encountered up close going through a similar experience.

That the film’s primary location is Abla’s kitchen does not feel coincidental; here, Touzani expands the socially acceptable ‘women’s place’ into a much broader, progressive stage where Abla, Samia and Warda can fight, they can feel, they can dance, and they can share secrets they never thought they could.