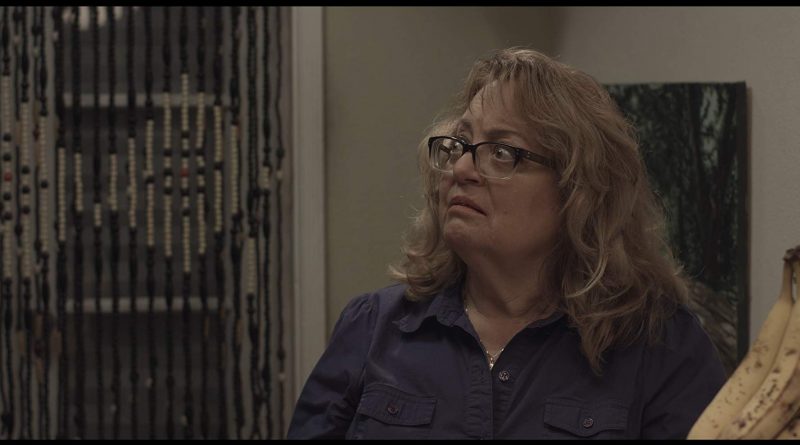 Directed by Richard Tatum and written by/starring Bruce Nachsin, the nine-minute, live-action short Dark Specter 2 (2019) opens with self-important good-guy Vibraboom (Mark Iverson) and glowering, scarlet-clad, KISS-eyed supervillain Dark Specter (Nachsin)—real name: Bertrand—duking it out on an anonymous city street over a big bag of stolen cash. The bad guy sort of wins this once in a while, though the loot gets incinerated (pesky fireballs!) and Vibraboom manages to insult Specter by calling him “Little Red Riding Hood” before losing his head in the worst possible sense of that term. Evil Dark Specter!

And then the Specter goes home to make breakfast for his demurely ditzy mom (Judy Nazemetz), who appears to be slipping into dementia and sweetly indulges her comic-book-loving son, secure in the knowledge that he’s just imagining his adventures in super-villaining.

It’s kind of funny and it’s kind of sad, a tough combination to pull off and which Dark Specter 2 does with commendable skill.

Nachsin spoke at the screening alongside director and fellow Marvel comics-lover Richard Tatum (both well-schooled in Marvel’s “it’s all about family” vibe) and writer-producer Manuel Gutierrez, who confessed with a smile that he was actually more a fan of the sex-and-violence-driven Heavy Metal magazine (1977-1992). Nachsin explained that Dark Specter was conceived as a series and said there’s “a 13-episode bible” but that the project itself is mired in “pre-production Hell.” That said, the six-minute online prequel –in which DS faces off against insufferable good-guy Spark (Evan Alexander Judson) is a great introduction to Nachsin’s snarky mix of geek love and willingness to have irreverent fun with superhero conventions.