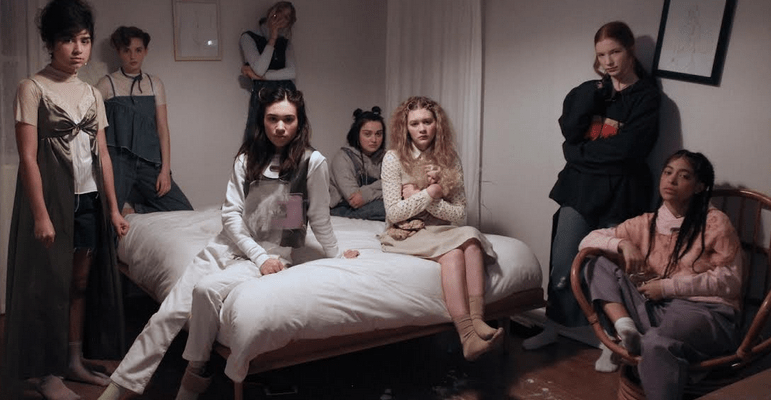 Ladyworld may be a new cinematic destination, but the territory it explores is hardly uncharted.

Stop me if you’ve heard this one before (and you have): disparate characters, stranded together and struggling for survival following a cataclysmic event.

Some scenarios focus on the group’s collective battle against the elements. Ladyworld follows another, equally familiar tradition: group members battling each other. (Lady of the Flies, anyone?)

In this case, it’s eight teenage girls, gathered for an extended birthday party.

Ladyworld‘s opening credits feature not the sight but the sound of what seems to be a massive earthquake that leaves the group isolated in a remote house, without water, power or — horrors! — mobile phone service.

Resourceful Olivia (Ariela Barer) emerges as the group’s voice of reason. (But of course: she’s “the smart one.”) Soon enough, she has a rival for authority: Piper (Annalise Basso), “the pretty one,” who’s also a card-carrying mean girl, determined to undermine Olivia’s practical plans.

Their inevitable conflict unleashes a series of stylized, sporadically suspenseful mind games: some manipulative, some hallucinatory, a few genuinely insightful.

All of them show off director Amanda Kramer’s theatrical flair. Her feature debut emphasizes the setting’s inherent claustrophobia, with the characters trapped in the damaged, isolated house — and in their own changing bodies and psyches.

Try as she might (and my, how she tries), Kramer’s visual flourishes don’t always complement Ladyworld’s themes. Sometimes the script (credited to Kramer and co-editor Benjamin Shearn) wanders off into elliptical, fanciful realms; at other times, on-the-nose dialogue and symbolism serve as virtual sledgehammers.

Whether that’s enough to make Ladyworld worth a visit depends on what you expect. Just as long as you don’t expect too much.