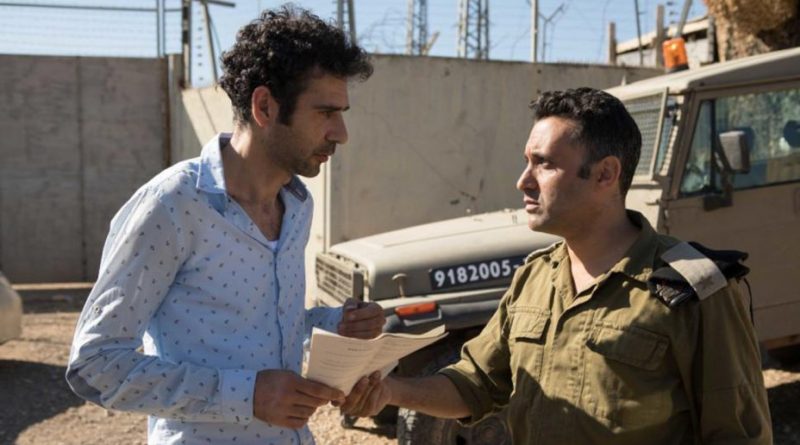 Humorous takes on difficult situations prove very risky but also quite rewarding when they work. Director and co-writer Sameh Zoabi faces his challenge head on with Tel Aviv on Fire, both the title of the film and of the soap opera/spy story produced for Palestinian television in 1967, three months before the Six Day War, as opening credits announce.

Zoabi immediately establishes this rarefied world of intrigue with a scene from the tv series, complete with exaggerated music. On hand is a nervous Salam Abbass, his uncle the showrunner, hence Salam’s position coaching actors on their pronunciation thanks to his speaking excellent Hebrew. Quite by accident, stopped at a West Bank roadblock between the tv studio in Ramallah and his home in Jerusalem, Abbas finds a fan for his series in Israeli Defense Forces officer Assi Tzur.

No spoilers, but soon Salam’s personal and political worlds become entangled with Assi’s in unexpected, amusing ways. A timid Salam struggles so understandably, wanting to be important at work and attractive to his love interest. This makes him quite endearing, especially given the performance of Kais Nashif who perfectly insinuates himself with Assi and the tv crew. No alpha male, Salam had me rooting for him throughout.

Similarly, Yaniv Biton as the checkpoint captain expresses just the right amount of intimidating, manipulative bravado all in the service of pleasing his wife and friends. The balancing act achieved is impressive, implicitly giving the Israeli and the Palestinian men strikingly similar goals despite one’s submissive position and the other’s dominant one.

Comedy is always a finely tuned art form. Co-writer/director Zoabi uses it here with a delicate, albeit absurdist approach that deftly takes on this impossibly challenging world. The music helps enormously to establish the melodramatic ambiance, sufficiently distant from the real, embattled one to permit laughter. Technically, the acting, the pace, the compositions, and the flirting with farce—all these make me wish that, as here, the real world could be changed by a facetious fictional one.

Among several awards, Tel Aviv on Fire won the Israeli Film Competition Award for Best Film at the Haifa International Film Festival. In Arabic and Hebrew with English subtitles.