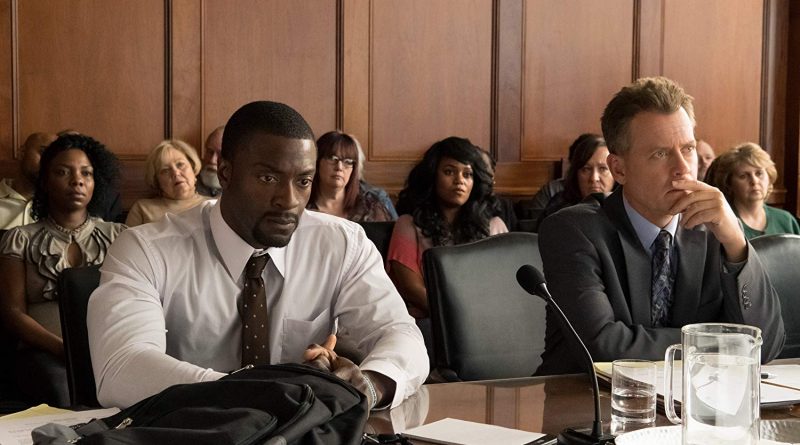 Timing is everything – and, unfortunately, the release of this redemption story coincides occurs at a time when #MeToo and documented incidents of sexual assault dominate the news feed.

At Polytechnic High School in Long Beach in 2002, teenage Brian Banks (Aldis Hodge) was a linebacker on the prestigious Jackrabbit team with an assured scholarship to the University of Southern California.

But after Banks hooked up with coed Kinnesha Rice (Xosha Roquemore), she accused him of rape. Following his arrest, the public defender urged him to make a no-contest plea deal – after which he not only received a six-year prison sentence but was also required to register as a sex offender and wear an ankle monitor during his parole.

Having lost all hope of a professional football career and unable to find gainful employment, Banks – with the support of his single mother (Sherri Shepherd) – turns to idealistic attorney Justin Brooks (Greg Kinnear) at the California Innocence Project to overturn the verdict and clear his name.

At first, Brooks and his tenacious team are reluctant to publicly place blame on a victim of sexual assault but they persevere, noting that California’s laws are draconian enough to make Alabama seem liberal.

Eventually, confused Rice recants her testimony and Banks is exonerated. According to the epilogue, at age 28, he became the oldest player ever to join the N.F.L.

Formulaically scripted by Doug Atchison, it’s directed by Tom Shadyac, who helmed comedies like “The Nutty Professor,” “Bruce Almighty” and “Liar Liar.” Back in 2006, Shadyac suffered a near-fatal bicycle accident and post-concussion trauma. As part of his recovery, he moved to Memphis, reconnected with his Catholic faith and decided to make this inspirational biopic as his comeback.

On the Granger Movie Gauge of 1 to 10, “Brian Banks” is a solid, sincere 6, perhaps provoking discussion about sexual misconduct.