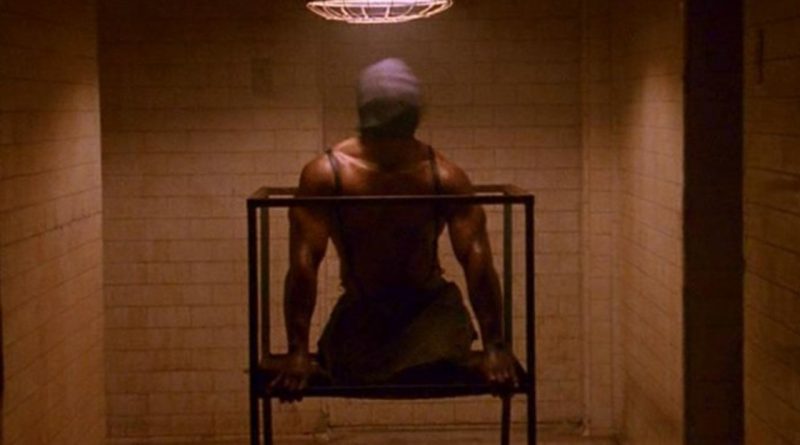 A remake of the 1990 psychological horror film, this new Jacob’s Ladder (which debuted on DISH network before receiving a theatrical release) manages to seem longer than the original—despite being nearly 15 minutes shorter—and is ultimately both less eerily stylish and less compelling.

Dr. Jacob Singer (Michael Ealy) is a trauma surgeon who served in Afghanistan; his brother Isaac (Jesse Williams) also joined the military. While Jacob is haunted by his military experiences—the worst of which was fighting to save a grievously wounded soldier whom he only realized was his brother after the battle was lost—he’s built a solid post-war life compete with a beautiful, accomplished wife, Samantha (Nicole Beharie); their baby boy Gabriel and a lovely home. Yes, Jacob has bad dreams—who wouldn’t?—but he’s in therapy and he has a purpose: He works at a VA hospital in Atlanta that serves other veterans, many of who are in rough shape, both physical and mental. All’s pretty good until a chance encounter upends everything: A homeless man recognizes Jacob and tells him that he served with Isaac and that Isaac is still alive; in fact, he lives in Atlanta. Jacob can’t not try to find his brother, and what follows is a razor-ribbon lesson in getting what you wished for.

Based on Bruce Joel Rubin’s screenplay for the 1990 version, as reinterpreted by Jeff Buhler (The Prodigy, Pet Sematary, Midnight Meat Train) and Sarah Thorpe, this Jacob’s Ladder reproduces one of the original’s most arresting scenes (it involves full immersion in a bathtub filled with water and ice cubes); its creepiest image—that of human faces morphing into a misshapen, hellish blur inspired by the paintings of British painter Francis Bacon, though director David M. Rosenthal employs it more sparingly than did Lyne; and its ‘this will be on the quiz’ quote from Christian mystic Meister Eckhart: “[I]f you’re frightened of dying and… you’re holding on, you’ll see devils tearing your life away. But if you’ve made your peace, then the devils are really angels, freeing you from the earth.” But as a movie about living with haunting memories and hallucinations so vivid that they threaten to subvert reality it falls short. The fault doesn’t lie with the actors: Ealy and Williams are equally compelling as the brothers, whose lives were shaped by a dynamic that made them both allies and rivals—a rivalry that included the love of Samantha.

But while there are striking sequences, notably Jacob’s Orpheus-like descent into an underground homeless encampment hidden beneath the Atlanta subway tracks, this Jacob’s Ladder lacks the feverishness of the first version, perhaps because successful rubber-reality movies require a director willing to risk ridiculousness. That’s a quality director Adrian Lyne (Flashdance, Fatal Attraction, 9 1/2 Weeks) never lacked, and it helped give the 1990 version a queasy-making quality that dovetailed beautifully with the material. Rosenthal—whose credits include 2015 thriller The Perfect Man—knows how to direct a suspense sequence, but this Jacob’s Ladder is less disturbing. There’s the sense of a net beneath the tightrope, a railing at the edge of the precipice that undercuts the premise’s fundamental horror by reassuring viewers that it’s okay—the really creepy stuff is just metaphorical… imagine Angel Heart without the freight-elevator ride to Hell.