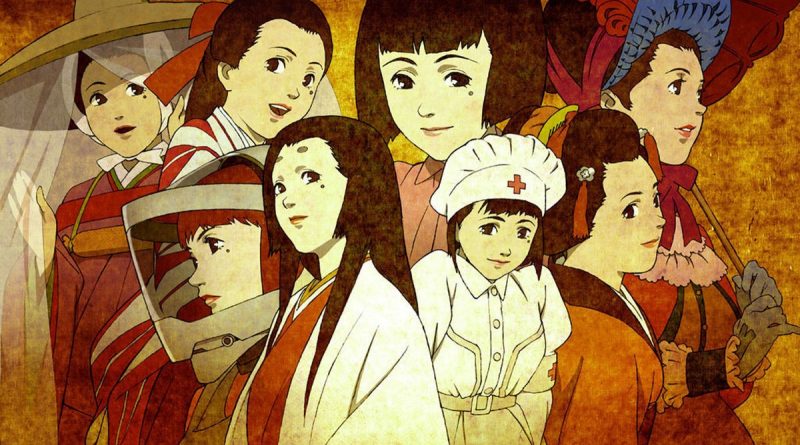 Millennium Actress showcases animé’s interweaving of the personal and the political.

One of the outstanding features of Japanese animé is the artists’ attention to detail. Captivating stories intertwine complex characters’ political and personal circumstances, kept at a safe distance through animation, all the while presenting poignant content. Co-writer/director Satoshi Kon’s 2002 Millennium Actress comes close to achieving the highest artistry while delivering a bittersweet, deeply moving narrative.

The story begins as the lauded Genei Studios are destroyed, prompting a tribute to Chiyoko Fujiwara, the legendary star at Ginei, meaning lotus, for seventy years. Director Genya Tachibana and his cameraman Kyogi Ida find the elderly, reclusive Chiyoko and persuade her to revisit her past. In a clever development, director Tachibana and cinematographer Ida enter Chiyoko’s memories as she relates them, capturing them on film as full participants.

The past and present dance together beautifully and imaginatively through Chiyoko’s story, a provocative presentation of a young girl who befriends a wounded soldier, a painter, on the run during the Manchurian war. He gives her a key, a symbolic and literal item Chiyoko treasures as she searches for him. Juxtaposing her film roles (a solid sampling of Japanese history including the Great Kanto earthquake, war with China, samurai, spaceships, and monsters) with her personal quest, Chiyoko never forgets the love that drives her, the key representing, in the soldier’s words, “the most important thing there is.” Impressive action sequences alternate with quiet, emotional moments. Reality and fantasy take center stage at different times, much as in real life. That Chiyoko recollects in old age makes her wisdom and longing convincing and heartbreaking.

Among its awards, Millennium Actress shared the Grand Prize in the Japan Agency of Cultural Affairs Media Arts Festival with Hayao Miyazaki’s Spirited Away. This remastered, beautifully restored Millennium Actress is offered in two versions, one in Japanese with English subtitles and one dubbed in English. Though I’m usually a purist about privileging the original language, having seen both versions, in this instance I must say the dubbed version is quite good.