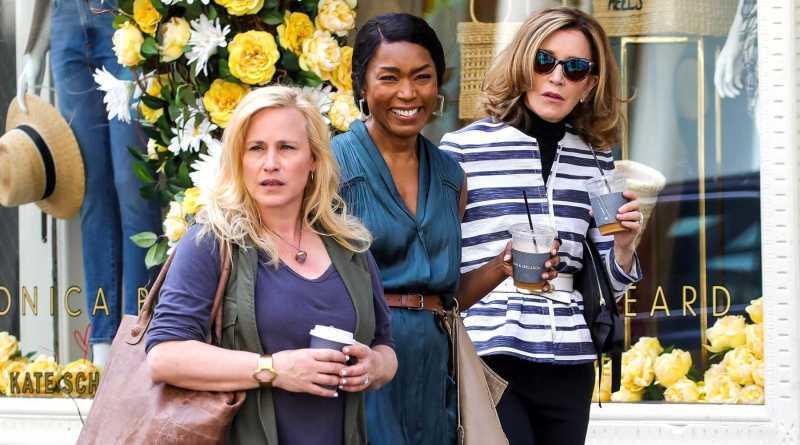 There’s an old saw that says “a son is a son until he takes a wife, but a daughter is a daughter for the rest of your life.” Otherhood is about proving that a son doesn’t have to get married for his relationship with his mother to dwindle.

Carol (Angela Bassett), Gillian (Patricia Arquette), and Helen (Felicity Huffman) are all mothers living in Poughkeepsie whose now-grown sons grew up as best friends. Now all of the boys live in New York City, and the distance between them and their moms is far greater than the miles from upstate New York to Manhattan. When the three young men don’t call on Mothers Day (though one sends a text), the women decide to take a road trip, barge their way into their sons’ apartments, and ask not only why they didn’t get contacted on the holiday, but why they know so little about their sons’ lives in general.

That’s the plot; the real story of director Cindy Chupack’s script (co-written with Mark Andrus and based on a novel by William Sutcliffe) is how these three women define themselves now that they can’t use motherhood as the measuring stick of their lives. All three admit that by any measure they’ve been successful moms: After all, they’ve worked themselves out of a job by raising three capable, mostly-nice, mostly-successful men. Chupack also doesn’t make Carol, Gillian, and Helen perfect, “oh-woe-is-me” moms — once they meet with their sons, it’s clear that each son has been pulling away not at random, but because there are some real issues there (Helen and her son Paul [Jake Lacey] are particularly rough on one another). While at the beginning the three moms are clearly who we’re supposed to be sympathizing with, Chupack is savvy enough to show that being a good mom doesn’t mean you’re a perfect person, or that successful motherhood will mean your relationship with your child will evolve in exactly the way you want it to.

Chupack and Andrus include a little too much in their script; there’s a singing-in-the-car scene, a let’s-go-clubbing scene, and a makeover scene (she only needed to include “dancing around a table” to win Chick Flick Bingo). That’s a shame, because watching Bassett, Arquette and Huffman grapple not only with how their relationships with their sons have changed, but about how their relationship with one another has, is the best part of the film. There should have been more time spent on that and less time on watching the three women do tequila shots.

(A word about the makeover scene: the women go with Carol to Gillian’s son’s ex-girlfriend’s salon, who gives Carol a dramatic new look. Carol does ask the (white) stylist if she’s used to working with hair of her “texture,” and the stylist says that she is; it’s refreshing that the movie acknowledges that styling black hair is a skill unto itself. That said, there would be an easier way of handling that scene: Just make the ex-girlfriend black. Gillian says her son has a taste for the “shiksas,” meaning non-Jewish, usually white women, but cut that line and not only does the salon scene become more believable, Otherhood would have had three substantial black characters instead of two.)

On the whole, Otherhood is an easily watchable story that’s not often told. The mothers are more than shrill and overbearing (though at times they are both); the sons are more than ungrateful and sullen (though at times they are both). Audiences should enjoy their time spent with these three moms — and then, if they can, call their own afterwards.