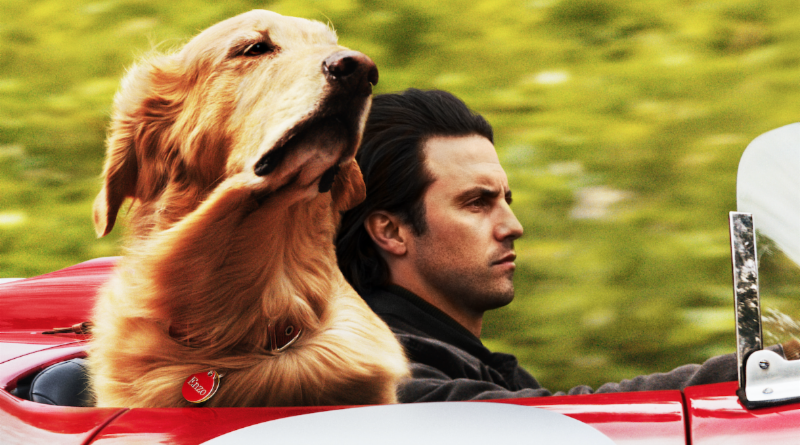 Based on Garth Stein’s best-selling 2008 novel, this dramedy is about a golden retriever named Enzo (raspy voiced by Kevin Costner) whose earnest owner, Denny Swift (Milo Ventimiglia), named him after Italian racing legend Enzo Ferrari. “I was meant to be his dog,” Enzo notes.

Set in Seattle, the tepid story opens as elderly Enzo is nearing death, so his esoteric reminiscences and erudite, philosophical observations are presented as flashbacks.

Denny’s goal is to achieve success as a race car driver; his particular skill is his ability to drive effectively and face adversity while racing in the rain.

Along the way, Denny meets and marries angelic Eve (Amanda Seyfried). “Denny was clearly taken with her grooming,” Enzo warily observes. “She probably bathed every day…I loathed the attention he lavished on her – with her opposable thumbs and plump butt.”

When he’s not in the car, Enzo loves to watch television with Denny, particularly a documentary about Mongolia where certain tribes believe that, if dogs learn everything they’re supposed to learn, they will be reincarnated as human beings.

Predictably adapted by Mark Bomback (“War for the Planet of the Apes”) and leisurely directed by Simon Curtis (“Goodbye Christopher Robin”), it’s contrived, veering toward overly melodramatic, not unlike “Marley & Me,” “A Dog’s Purpose” and “A Dog’s Life.”

Best known for TV’s “This Is Us,” Milo Ventimiglia acquits himself admirably on the big screen. His racing scenes were filmed at Canadian Tire Motorsport Park during the WeatherTec Championship Mobil 1 SportsCar Grand Prix.

On the Granger Movie Gauge of 1 to 10, “The Art of Racing in the Rain” is a soapy, sentimental 6, resulting in a soggy handkerchief.