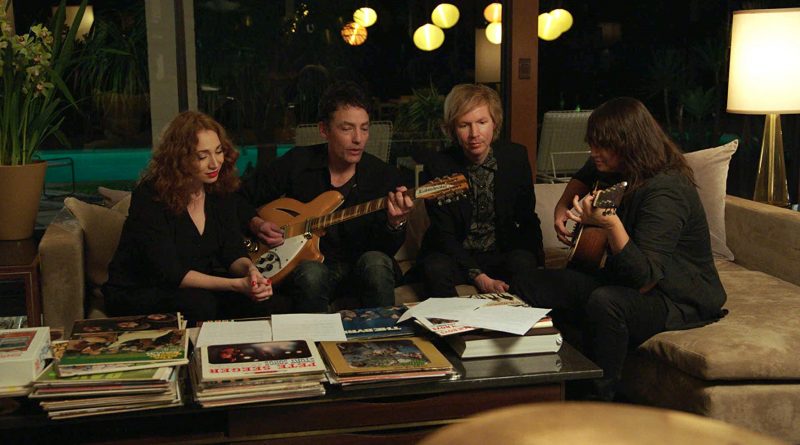 First-time director Andrew Slater and Wallflowers frontman Jakob Dylan tap into the lasting reverberations of the early-day Laurel Canyon folk-rock scene in their evocative documentary “Echo in the Canyon.”

Likely due to their music industry connections – Slater as the former president of Capitol Records and Dylan as the son of music legend Bob Dylan – their rock doc boasts a strikingly laidback intimacy for such a star-studded affair.

Joining them on their memory lane jaunt through the winding streets of the now-legendary Laurel Canyon neighborhood of Los Angeles are Brian Wilson of the Beach Boys; Stephen Stills of Buffalo Springfield; Roger McGuinn and David Crosby of the Byrds; Michelle Phillips of the Mamas and the Papas; Eric Clapton of Cream; Ringo Starr of the Beatles; John Sebastian of the Lovin’ Spoonful; Graham Nash of the Hollies; music producer Lou Adler; singer-songwriter Jackson Browne; and the late Tom Petty in his last on-camera interview.

The candor of the interviews makes “Echo in the Canyon” compelling to watch. Crosby readily admits he earned his ejection from the Byrds with his snide attitude and bad behavior; Phillips speaks candidly about her marital infidelities that led bandmate and husband John Phillips to pen the sharply worded hit “Go Where You Wanna Go”; and several of the aged icons recall the impromptu drop-ins by likeminded neighbors that often turned into fruitful musical moments – and drug-laced parties that occasionally were broken up by the police.

But it’s particularly fascinating how the aptly-titled film details how ideas and inspirations bounced back and forth between the various 1960s bands of the SoCal scene and the British invasion. Wilson describes how the Beatles’ “Rubber Soul” inspired him to write “Pet Sounds,” which in turn sparked the Fab Four’s “Sgt. Pepper’s Lonely Hearts Club Band.” Clapton acknowledges that he must have ripped off Buffalo Springfield’s “Questions” on “Let It Rain.”

And it’s impossible not to miss Petty, to whom the film is dedicated, when he charmingly spins the yarn about how an ailing George Harrison ended up with the spanking new 12-string Rickenbacker guitar intended for John Lennon and used it to riff off of the Byrds’ cover of Peter Seeger’s “The Bells of Rhymney” for the Beatles’ “If I Needed Someone.”

For a music guy, Slater keeps his rock doc visually captivating with rare photographs, vintage TV performances and clips from the 1969 film “Model Shop,” which crystallizes the vibe of SoCal in the late 1960s. The movie’s narrow focus – it covers from 1965-67, specifically from the release of the Byrds’ cover of Bob Dylan’s “Mr. Tambourine Man” to the drop of Neil Young’s Buffalo Springfield swan song “Expecting to Fly” – means that later Laurel Canyon legends Carole King is only briefly mentioned, while Joni Mitchell is omitted entirely.

To their credit, Slater and Jakob Dylan, the film’s host and executive producer, take steps to ensure that women’s voices still make into the rock doc. Much of the film follows Dylan and several of his musical contemporaries –Norah Jones, Regina Spektor, Fiona Apple, Cat Power and Beck – onto the Orpheum Theatre stage and into various L.A. studios, where they perform ‘60s classics like “Never My Love,” “Goin’ Back” and “In My Room” for a 2015 tribute concert and the documentary’s soundtrack. Former Edward Sharpe and the Magnetic Zeros member Jade Castrinos’ cover of “Go Where You Wanna Go” captivates even Phillips and hopefully will help establish her as a new star.

But the true stars of “Echo in the Canyon” are the timeless songs, which continue to reverberate more than 50 years later.