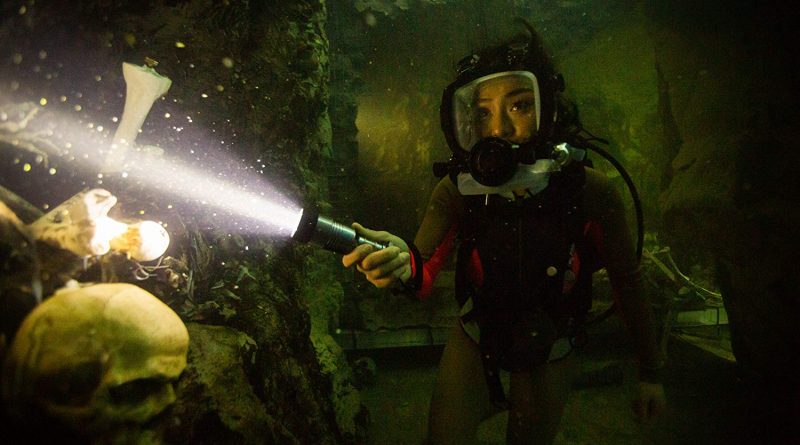 Perhaps every summer needs a sharksploitation movie, a monster emerging from the murky deep, but this sequel to 47 Meters Down (2017) is just a silly splasher!

Set on the Yucatan Peninsula in Mexico, the aquatic thriller introduces step-siblings, daughters of an American archeologist, Grant (John Corbett), and his wife Jennifer (Nia Long).

Chiding, “You guys have to look out for each other,” Grant plans a weekend trip for the bickering girls but work interferes, so they’re sent on a shark-watching excursion in a glass-bottomed boat.

Instead of taking the planned tour, they join Sasha’s friends – Alexa (Brianne Tju) and Nicole (Sistine Stallone) – to explore a picturesque lagoon that’s connected to part of the submerged Mayan archeological site that Grant and his team are investigating.

Using scuba gear they found floating on a raft, the bikini-clad girls descend into the first chamber of the catacombs to see the spooky temple statues. But – after being startled by one of the cave fish – one diver accidently knocks over an aged stone relic.

Then a ravenous, blind albino shark, alerted by the swimmers’ frantic flailing, causes the entrance tunnel to collapse, trapping them inside. The only way they can escape is by diving deeper into the labyrinthine submerged city, accompanied by mask-muffled shrieking.

Working from a minimalist script he wrote with Ernest Riera, director Johannes Roberts relies on claustrophobia, slow-motion and jump scares, completely ignoring the fact that the girls’ oxygen tanks had already dropped from 100% to 40% during the first skirmish. Logic gets lost along the way.

On the Granger Movie Gauge of 1 to 10, 47 Meters Down: Uncaged is an implausible 3, running 89 minutes, including credits.