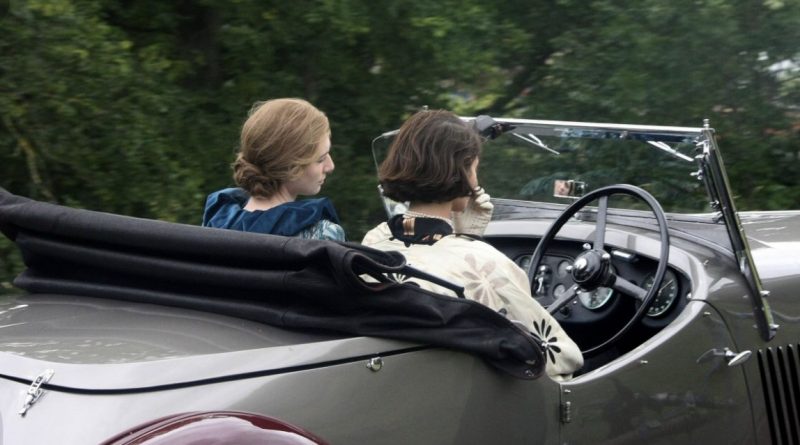 Vita and Virginia and, especially, Gemma Arterton’s role of Vita Sackville-West, has the daunting task of naturally drawing comparisons with the brilliant 1990 BBC miniseries Portrait of a Marriage with Janet McTeer’s masterful embodiment of Sackville-West during her passionate romance with Violette Keppel (Cathryn Harrison). In the new film, Sackville-West has moved on from Violette and becomes enamored of fellow writer Virginia Woolf (Elizabeth Debicki). Arterton as aristocratic Vita is flirty and full of life but she can’t vanquish the vision of McTeer who was absolutely commanding. Debicki, tall, regal and ethereal, fares better. She creates something fresh and fragile with Woolf, conveying her intelligence, idiosyncratic spirit and openness with her piercing eyes and yearning manner.

But the film’s attempt to show her mental state (it’s been speculated that Woolf was bipolar) via headaches, hallucinations and even at once point losing her speech are distractions from what is the film’s focus: the relationship between the women. Although both actresses offer interesting interpretations and are a pleasure to watch, the intensity of their attraction and what they really need from one another beyond writerly bonding isn’t as powerfully rendered as I wanted it to be, despite a compelling and not at all gratitous love scene. Arterton’s Vita is tempestuous, impulsive and sure of herself, sexually and otherwise; Virginia is cerebral, internal, curious and though in love with Vita she’s firm about her unwillingness to give more than she’s able. She has no intention of leaving husband Leonard or the publishing life/support system they’ve created together. The film is lovely to look at, as are its stars, but they often speak, sometimes straight to the camera, via the many letters they wrote to one another. This device may suit a movie about writers but it ends up making verbal, however witty, what should be emotional and dulling what should be electric.

Both women are privileged and unconventional, insulated by their literary circles— Vita is an aristocrat and several scenes take place at her majestic estate — but still, it’s the 1920s. Yet, there are few obstacles or high stakes for them, save for Vita’s imposing and disapproving mother (Isabella Rossellini) whose icy retorts could slay Maggie Smith’s acerbic Violet Crawley in a heartbeat.

Famed British actress and writer Eileen Atkins, who has played Woolf many times on stage and screen and wrote the stellar script for the 1997 film version of Woolf’s Mrs. Dalloway, cowrote the Vita and Virginia screenplay with director Chanya Button. As rich and interesting as the women’s correspondence is, perhaps rooting the script in their letters worked better on stage than on film.

Vita and Virginia’s love affair dissolves after Vita moves on to another conquest, Mary Campbell, through the women would remain friends. Woolf channels her emotions into her 1928 masterpiece Orlando with Sackville-West, famously, the inspiration for the gender-swapping, centuries-hopping Orlando and dedicated the landmark novel to her. This section’s fusion of passion, art and identity is what the film seems to be driving toward all along, but succeeding at only intermittently.