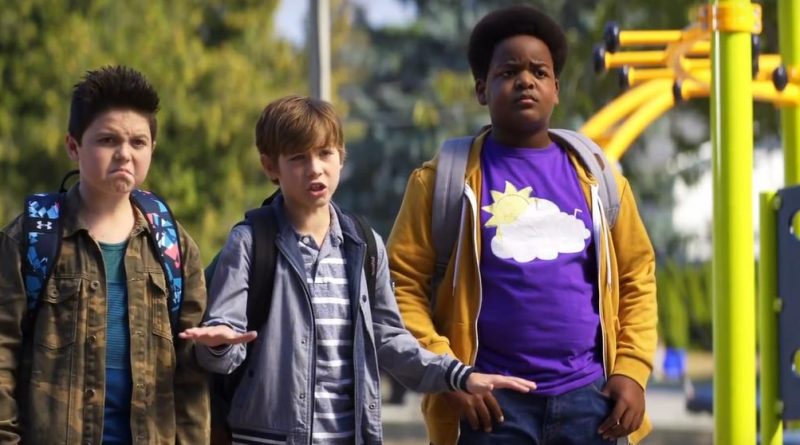 As a critic, I judge a movie by how well it accomplishes what it sets out to do. If it’s a comedy, it should be funny. So despite my misgivings about preteens’ spewing raunchy vulgarities, Gene Stupinsky’s coming-of-age story seems to amuse audiences, particularly in this era of sensitivity towards topics like sexual identity, bullying and objectification of women.

Known as the Bean Bag Boys, Max (Jacob Tremblay), Lucas (Keith L. Williams) and Thor (Brady Noon have been friends since kindergarten. At their suburban middle school, they’re mocked as ‘uncool’ by the Scooter Squad, led by Atticus (Chance Hurstfield).

When shy Max yearns to kiss Brixlie (Millie Davis), a skateboarding girl he likes, in prepubescent confusion he turns to rule-abiding Lucas and aspiring pop-star Thor to search for information about kissing on the Internet and practice on what they think is a CPR doll.

When that fails to satisfy their curiosity, they use an expensive drone that belongs to Max’s dad (Will Forte) to try to spy on a real couple making-out.

Scripted by Lee Eisenberg and director Gene Stupinsky (co-writers of Bad Teacher and TV’s The Office), it’s produced by Evan Goldberg and Seth Rogen (Superbad), who make sure there’s a crass mix of fresh-faced spontaneity and snappy set pieces revolving around adolescent angst and child-proof locks.

On the Granger Movie Gauge of 1 to 10, Good Boys is a shocking, smutty sweet 6, filled with sticky, R-rated misadventures and a poignant epilogue.