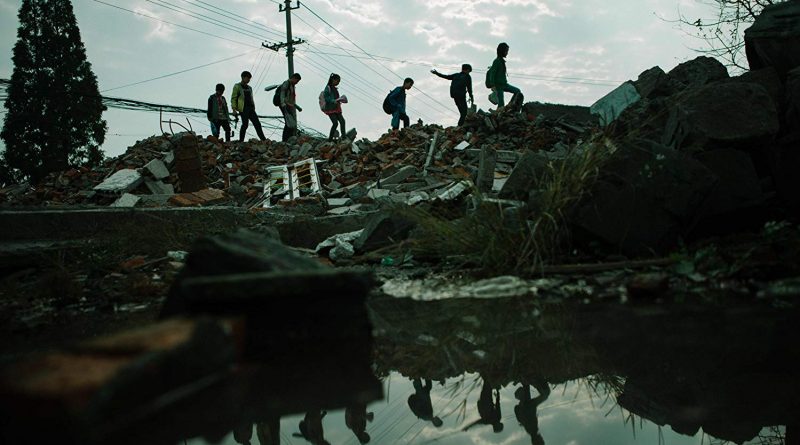 In his impressive but elusive feature film debut, Suburban Birds, writer/director Sheng Qiu offers two stories implicitly commenting on each other. They thereby suggest a handful of heady ideas for contemplation without ever explicitly mounting an argument for them. Further separating events into two parallel tracks, Sheng chooses different cinematic styles for each of the narrative threads.

The film begins with an arresting shot, a blurry circle within the frame, soon established as the survey instrument of crew member Hao. He and three other workers must evaluate problems in a rubble-strewn old housing estate targeted for construction of a subway line, if the problematic sinkholes and water leaks can be addressed. A restless Hao climbs in through an abandoned school’s window, discovers a student’s diary, and the story detours into that world.

In Academy (that is, early television’s 4 x 3) ratio, cinematographer Ranjun Xu composes with an eye for dynamic movement and crisp compositions in the children’s story, contrasted with distant and still shots for the adults with jump zooms thrown in for occasional emphasis. Color design defines characters and mood: the girls and boys, proud members of the Communist Children League of China, proudly wear their red bandanas and move through a bright outdoor world. The survey crew spends more time indoors in claustrophobic settings devoid of vibrant colors.

Upon reflection, though never spelled out, what emerges is a profound suggestion of the comparisons and contrasts in the interaction in the children’s world as well as that of the adults. Each group teases each other, bonds, argues, and laughs. The schoolchildren shoot at each other with play guns; the adults zing each other with words. Zheng teases us with a riddle concerning something the longest and shortest, fastest and slow, one piece that can be cut up. Life is exactly that, and it unfolds in Suburban Birds through meandering activity of work and play, revealing the breadth and depth of the human condition, along with its evolution. In Mandarin with English subtitles.