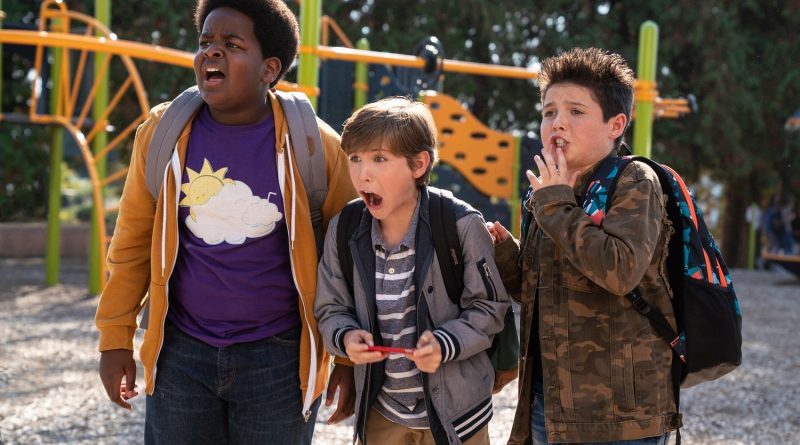 The naughty comedy “Good Boys” uproariously taps into some of the real-life aspects of adolescence that make preteens so unintentionally funny to be around: their put-on shrewdness that can’t conceal their innocence about the world, their befuddlement about what motivates adults to do what they do, and their hyper-seriousness about their rites of passage, from stomaching more than one sip of beer to getting the right spin on the bottle at a kissing party.

Unfortunately, the raunchy romp also has the childish tendency to take jokes too far, especially ones that involve f-bombs and sex toys.

Produced by “Superbad” masterminds Seth Rogen, Jonah Hill and Evan Goldberg, “Good Boys” only takes a few minutes to earn its R rating and confirm that it may be about kids but it’s definitely not for kids.

The feature film directorial debut for Gene Stupnitsky, who co-wrote it with his “Bad Teacher” collaborator Lee Eisenberg, the comedy chronicles a particularly zany day in the life of 12-year-olds Max (Jacob Tremblay), who has become fascinated with girls; Lucas (Keith L. Williams), who loves rules and is struggling with his parents’ (Lil Rel Howery and Retta) impending divorce; and Thor (Brady Noon), who is prepping for school musical tryouts when he’s not dodging his meddling little sister Annabelle (Lina Renna). Having dubbed themselves the “Bean Bag Boys,” the best friends since kindergarten are determined to stick together even as sixth grade has them starting to explore separate interests.

When one of the cool kids invites them to a kissing party at his house, Max is determined to finally kiss his cute classmate Brixlee (Millie Davis), a shy girl he has a crush on even though he’s never actually met her. Since he’s never kissed someone, Max breaks the rules and deploys his dad’s (Will Forte) drone over the neighbors’ fence in the hopes of catching the teenager next door making out with her boyfriend.

When the drone gets wrecked, the tweens skip school and embark on a mission to buy a new one. That goes awry when they accidentally steal molly from Max’s teenage neighbor Hannah (Molly Gordon) and her pal Lily (Midori Francis) and encounter exasperated Officer Sacks (Sam Richardson) while trying to shoplift a bottle of beer.

The junior road comedy is at its best when it finds humor in a heightened state of reality – one of the funniest sequences involves the boys starting a brawl at a fraternity house, while a scene in which the trio tries to cross a busy six-lane interstate was too real and triggered my parental anxieties – and proves surprisingly sensitive as its protagonists attempt to navigate their shifting friendships.

Both the thin story and the bawdy jokes wear out before the credits roll, but the filmmakers pack a lot of genuine laughs into the short and surprisingly sweet 90-minute caper.