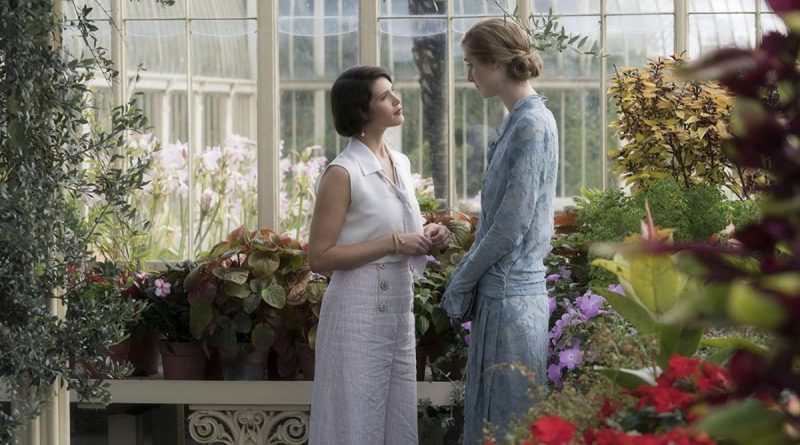 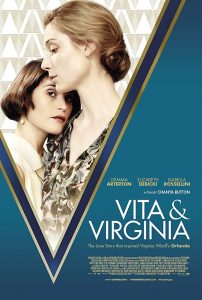 Most of those words take the form of correspondence between the two — from early, more formal notes after they first meet each other at a party to impassioned epistles exchanged when they’ve acknowledged their need for each other and are kept apart by convention and circumstance. Not that either is much ruled by convention when it comes down to it; both women lead fairly bohemian lives dedicated to art, conversation, and introspection.

That, of course, reflects the privileges and predilections of the class they belonged to; Sackville-West, in particular, came from aristocratic stock, and Arterton portrays her as having confidence and entitlement in spades — Vita goes after who and what she wants and is used to getting it, damn the consequences. Debicki’s Virginia is more delicate and unsure of herself, but she responds strongly to Vita’s spark and vitality, and her cool thoughtfulness is a compelling counterpoint to Vita’s impulsiveness.

Both actresses clearly care about the women they’re playing, as well as the relationship the movie hinges on. Button gives them both many moments to shine, and, in return, they deliver a powerful take on a connection between two people that was as much intellectual and emotional as it was physical. — Betsy Bozdech

Sandie Angulo Chen: Dorothy Parker famously quipped that the intellectuals and artists of the Bloomsbury Group “lived in squares, painted in circles and loved in triangles,” an observation that comes to mind as one watches Vita & Virginia, about legendary novelist Virginia Woolf ‘s (Elizabeth Debicki) 1920s affair with writer and socialite Vita Sackville-West (Gemma Arterton). Directed by Chanya Button, who co-wrote the screenplay with award-winning actor Eileen Atkins, the film is based on the passionate and prodigious letters between Woolf and Sackville-West. The film explores how the quasi-asexual (but deeply devoted to her husband Leonard) Virginia has a sexual awakening with the scandalously adventurous Vita. Both actors are fabulous portraying these women so far ahead of their time, and the costumes, art direction, and supporting ensemble are all remarkable. It’s a shame there isn’t a big-budget cable series dedicated to these Bohemian geniuses who shared their minds, bodies, and souls in the first half of the 20th century.

Sheila Roberts Chanya Button provides a fascinating backdrop for both women’s lives, capturing the iconic style and energy of 1920s London and the creative adventures of the Bloomsbury group of writers and artists who embraced a culture of sexual equality during that era. Read full review.

Leslie Combemale The magnetic attraction between Arterton and Debicki seems to draw the audience towards them both, holding us in thrall, even through their active self destruction and selfishness. The skill on display by these performers is impressive, but only as they relate to each other, which is as it should be, given the subject matter. Read full reivew.

Jennifer Merin Chanya Button’s Vita & Virginia is a truth-based narrative about the love affair between Vita Sackville-West and Virginia Woolf. Button and Eileen Atkins wrote the screenplay, based on the letters between the two legendary literary figures. With engagingly empathetic performances delivered by Gemma Arterton as Sackville-West and Elizabeth Debicki as Woolf, the poignant, provocative and exquisitely crafted film captures and explores women’s ethos and issues of the era.

MaryAnn Johanson: It’s 1920s London. (OMG the clothes.) Aristocrat and popular novelist Vita Sackville-West (Arterton) is a “promiscuous exhibitionist,” her disdainful mother (Isabella Rossellini) snipes. Vita’s husband, diplomat Harold Nicolson (Rupert Penry-Jones, sporting impressive historical facial hair), decries the “sapphic pageant” that is her life, as she engages in an endless array of dalliances with women. (They have a quietly open marriage, and he has dalliances with men. But he is a typical male hypocrite.) Read full review.

Cate Marquis Vita & Virginia is a gorgeously-appointed historical drama based on the facts of the romantic affair between literary giant Virginia Woolf and fellow writer Vita Sackville-West. The drama is directed by Chanya Button, who co-wrote the screenplay with renowned British actor Eileen Atkins, who used the letters between Woolf and Sackville-West as the basis for the stage play on which the film is based. Filled with stunning 1920s costumes and wonderfully lush sets, the film’s visual beauty seems aimed to seduce us, as much as the lively, aristocratic Vita (Gemma Arterton) sets out seduce the aloof, intellectual Virginia Woolf (Elizabeth Debicki). Read full review.

Screenwriter: Eileen Atkins, Chanya Button, based on the letters of Vita Sackville-West and Virginia Woolf