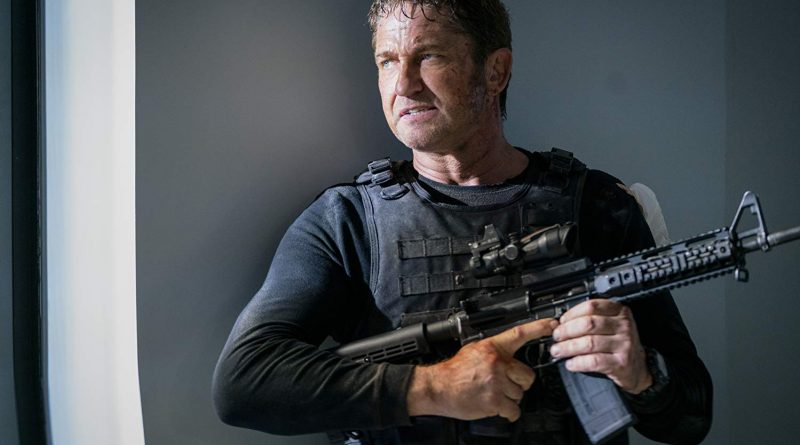 Three years after London Has Fallen, Mike Banning could be promoted to Director of the Secret Service under U.S. President Allan Trumbull (Morgan Freeman). Yet, despite his dependency on pain-killers and devotion to his wife Leah (Piper Perabo) and toddler daughter, Banning isn’t sure he wants the desk job.

But when a flock of lethal drones with face-recognition software target the President on a fishing trip, leaving him in a coma, and Banning is the only survivor on his security detail, FBI agents Thompson (Jade Pickett Smith) and Ramirez (Joseph Millson) suspect Banning, who is subsequently arrested for the assassination attempt.

Escaping from custody, Banning is determined to uncover the truth and clear his name. That involves domestic terrorism and dealing with mercenaries employed by Salient, a Blackwater-like contractor firm, headed by Banning’s scheming Iraq war buddy, Wade Jennings (Danny Huston), who claims: “War is deception.”

When Banning goes off-the-grid, he winds up with his gun-toting, geezer father in the woods of West Virginia. Scruffy survivalist Clay is so paranoid that he’s booby-trapped the surrounding forest to fatally deter unwanted visitors.

Co-written and directed by former stuntman Ric Roman Waugh, it’s filled with fast-paced action. Problem is: the predictable plot – credited to Robert Mark Kamen, Matt Cook and Waugh – is not only implausible but often incoherent.

And there’s a fanciful Butler/Nolte scene midway through the concluding credits.

On the Granger Movie Gauge of 1 to 10, Angel Has Fallen is a forgettable 5, except for its Eisenhower-era warning about America’s never-ending wars and reliance on mercenaries…i.e.: the military/industrial complex.