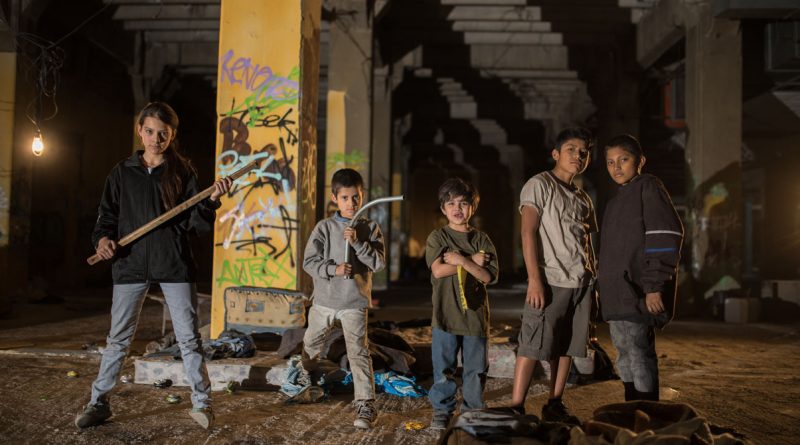 Mexican filmmaker Issa Lopez knows how to tell a dark fairy tale about war through the eyes of children with passion and imagination while adeptly combining fantasy with realistic drama. The writer/director/producer’s latest film, Tigers Are Not Afraid, is set in a grim urban landscape at the epicenter of Mexico’s dangerous drug wars. The movie’s haunting magical realism elements remind us of the extraordinary early work of Guillermo del Toro.

When school closes early one day due to cartel violence, Estrella (Paola Lara) returns home and discovers her mother is missing. Hungry, lonely, and unsure of her mother’s fate, the courageous young heroine joins a gang of four orphaned boys led by El Shine (Juan Ramon Lopez) whose parents have also disappeared. The gang becomes her new family. They live on the streets and in abandoned buildings, making the most of whatever they can scavenge, while trying to escape the terrifying, drug-related violence that surrounds them. This brutal war zone becomes the unsettling environment in which they struggle to make sense of a harrowing adult world with their childish creativity.

Lopez is a masterful storyteller who elicits marvelous performances from her talented young cast. Her love of fantasy and horror is evident in the film’s striking visual design which features many fantastical elements. They include winged insects, slithering snakes, a graffiti image of a tiger that springs to life on a wall, and a supernatural trail of blood that takes on a life of its own as it navigates streets, walls and stairwells to warn Estrella of impending danger as she searches for her missing mother.

While the story is set in Mexico, its themes of love, courage, displacement, loss and survival are universal. It’s a gripping cinematic tale that should resonate broadly with an international audience. It’s especially timely in today’s war-ravaged world where innocent lives are lost every day and those left behind are haunted by the tragedy. It’s noteworthy that Lopez is teaming up next with none other than Guillermo del Toro for a Werewolf-Western.