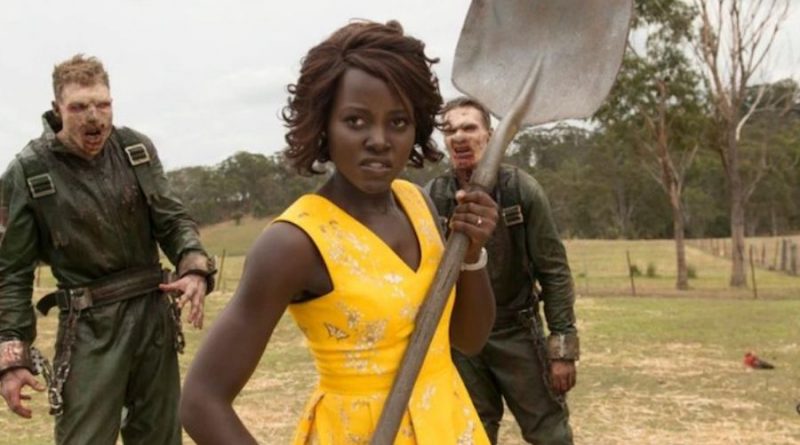 It’s hard to express just how desperately the world needs to see a zombie-slaying Lupita Nyong’o playing Taylor Swift songs on a ukulele to a kindergarten class in the Australian bush until you’ve actually seen it. On this front alone, Abe Forsythe’s sophomore feature Little Monsters is a gift. Smiling and singing, Nyong’o’s unforgettable Miss Caroline fights back her own fears in order to calm her young students, bringing the concept of “duty of care” to a whole new level.

It’s a classic day-trip gone wrong scenario when a class full of young five-year-old Australians and their schoolteacher find themselves in the path of an army of rampaging, brain-hungry zombies, escaped from a top secret US military facility that is located bewilderingly close to a kid-friendly wildlife sanctuary. Convincing her pupils that the ravaging undead hordes who have circled the gift shop where they have found temporary protection are in fact just playing a fun ‘game’, keeping the children calm and feeling safe is Miss Caroline’s primary goal, even more so than protecting her own life.

Added to the mix is aggressive, socially tone-deaf manchild Dave (Alexander England), the uncle of one of Miss Caroline’s students who – amongst many of the adult male relatives of her pupils, we are told – has developed a serious crush on the young teacher. Despite so overtly lacking the skill-set required to deal with young children, Dave regardless volunteers to join the excursion ostensibly as a helper, considering it the perfect excuse to spend time with Miss Caroline.

Thrown into the mix is another textbook case of failed masculinity, the internationally-famous American children’s television star Teddy McGiggle, played in a spectacularly repulsive turn by Josh Gad. But nothing can take the shine off Miss Caroline’s dedication to her students, and her professionalism and compassion teach both men lessons that will dramatically change the direction of each of their lives.

Following on from the success of his break-out 2016 debut feature Down Under – a scathing black comedy set around the very real horrors of the 2005 Cronulla race riots in Australia – Forsythe’s inspiration for that first film was sparked by questions about the kind of world he was bringing his young baby son into. Again, Forsythe’s child served as inspiration for Little Monsters, yet in a notably different way; just like Dave’s nephew Felix (Diesel La Torraca) in the film, Forsythe’s son has severe allergies. Forsythe’s own experience of letting go of his at-risk child into the care of another human being – a teacher – was a lesson that left him profoundly moved and wanting to highlight the specialness of those called to a teaching vocation.

A simultaneously scathing expose of hollow masculine bravado, a deliberately naff zombie romantic comedy (even the kids joke about how shabby the zombie effects are), and Taylor Swift fanfic, Little Monsters is above all else a love letter to school teachers. Full of heart and music and joy as much as it is blood and guts, Nyong’o is electrifying; alongside Jordan Peele’s Us, Little Monsters consolidates her place as one of the year’s most unexpected but very welcome horror superstars.